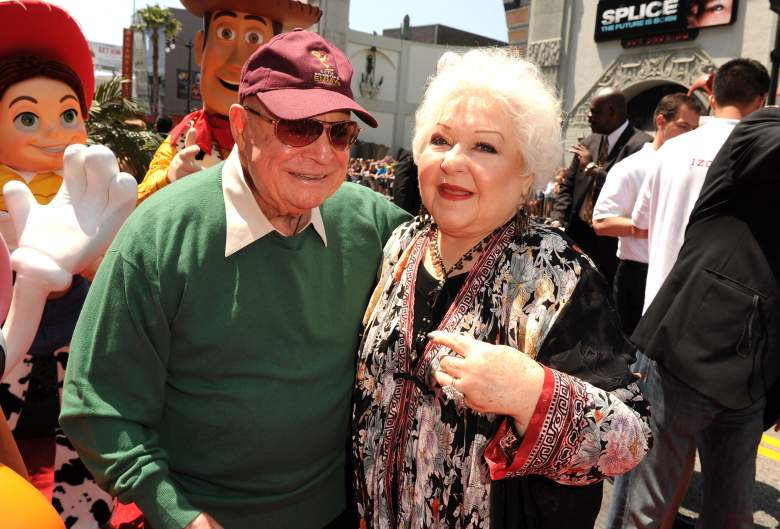 Don Rickles and Estelle Harris at the Toy Story 3 premiere on June 13, 2010 in Hollywood, California. (Getty)

Legendary comedian Don Rickles has died at the age of 90. In recent years, one role Rickles was known for was Mr. Potato Head in the Toy Story films. A new sequel, Toy Story 4, is on the way, so had Rickles already recorded his dialogue before he died? Or will Disney have to recast the part?

Unfortunately, Rickles had not recorded his Toy Story 4 dialogue prior to his death, according to The Hollywood Reporter. That’s because Pixar is evidently still rewriting the film, which does not come out until June 2019.

Immediately after the news of Rickles’ death was announced, some fans were hopeful that he might have already recorded his lines for the movie. In 2015, Tom Hanks said in an interview on the Graham Norton show, “We’re now recording Toy Story 4.” However, he later clarified that he’s only recorded a bit of it and that the way this process works is that the actors go in every six months or so to perform more dialogue.

“Now they just show us the stuff that we’re in, and keep everything else top secret,” Hanks said, according to Yahoo. “So I’ve gone along, I’ve worked alone and with Annie Potts – who plays Bo Peep – and the thing is, animated movies take about three and a half years to make. You go in about every six months and do a little bit work.“

If someone else is brought in to play Mr. Potato Head, this would not be the first time the Toy Story series has had to recast a part due to an actor’s death. Jim Varney, the voice of Slinky Dog in Toy Story and Toy Story 2, died in 2000, and so for Toy Story 3, the part was played by Blake Clark.

Toy Story 4 is scheduled to be released on June 21st, 2019. The plot will revolve around Woody and Buzz Lightyear searching for Bo Peep; in Toy Story 3, it is suggested that she was either sold, donated, or thrown away before the events of the film.

Read More
Breaking News, Disney, Entertainment, Movies, Toy Story
Legendary comedian Don Rickles has died at the age of 90. Is he still going to be Mr. Potato Head in Toy Story 4? Had he recorded his dialogue before he died?