After publicized feuds with Jay-Z and Kendrick Lamar, hip-hop superstar Drake has another enemy on his hands… only this one, NBA player Draymond Green, seems to be in on the joke.

It all started when Drizzy hung out with the Golden State Warriors after they defeated the Pelicans on April 8th. He went out for a night on the town with players Steph Curry, Kevin Durant, and Green, who, upon seeing Drake’s combination of white shoes and white socks (a style don’t), decided to roast him on Snapchat. “See this n%#*^ with the white socks,” Green wrote in the caption, “Not pimpin!!!” The line itself refers to a Katt Williams skit on the 2004 song “Pimpin’ All Over The World.”

The lyrical nod is pretty ironic, given that Drake had previously given Green a shout-out on his 2016 single “Summer Sixteen.”

Drake accepted his role as the momentary punchline, but he made sure to pay Green back on Wednesday (April 26th) after he posted a photo of the athlete lying down in bed. “When she asks how much fun you’re having without her…” Drake wrote in the comment section, sparking a wave of fans who joined in mocking Green’s sultry pose.

When she asks how much fun you're having without her…

Ever the competitor, Green wasted little time with his retort and posted an unflattering looking photo of the rapper at an awards show. “When you get that text saying you no longer have to be an extra on Degrassi!” he captioned, referencing Drake’s origins as an actor on the Canadian television series Degrassi: The Next Generation (2001-15). Green threw in the hashtag #WAR for good measure, proving that Drake isn’t the only one who can throw shots on social media.

When you get that text saying you no longer have to be an extra on Degrassi! @champagnepapi #WAR

Drizzy vs. Draymond? Count us in. It’s clear that both are getting a good laugh out of the back and forth, and as long as fans enjoy it in return, there’s no telling how long this Instagram “WAR” will rage on. 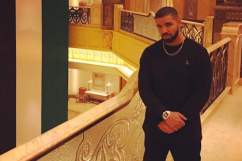 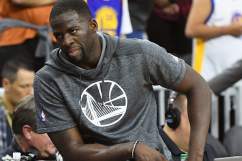