Who's falling behind me ?

Hip-hop superstar Drake has an estimated net worth of $100 million, according to The Richest. He bought his lavish mansion, dubbed the “YOLO Estate,” for $7.7 million in 2012. His latest project, the More Life playlist, broke the record for most streams in a single day and sold 505,000 equivalent albums in its first month. And yet, when Drake’s home was burglarized a few weeks ago, the guilty party didn’t bother to take advantage of this wealthy disposition.

According to TMZ, a member of Drake’s entourage walked into the “YOLO Estate” at 10:30 p.m. on April 3rd and found a 24-year-old woman in one of the bedrooms. She was reportedly wearing one of Drake’s hoodies. Police were called soon after, and the woman claimed that she had permission to enter the house, but later admitted to stealing a very strange array of objects from the Champagne Papi: Pepsi, Sprite, and a bottle of Fiji Water. Drake was away from the house at the time. TMZ also reports claims that there was no sign of forced entry, nor was it clear how she broke in in the first place.

See me in traffic…pictures in lanes.

This isn’t the first time Drake has been linked to theft. Last year, the “Passionfruit” rapper was on his Summer Sixteen Tour with Future, when it was reported that their tour bus was broken into and robbed of $2-3 million in jewelry. While the bulk of it belonged to Future, HNPP says that Drizzy was livid over the situation, and was caught on video bawling out one of his security guards. A suspect, Travion Lamar King, was taken into custody and charged with the crime in September 2016. 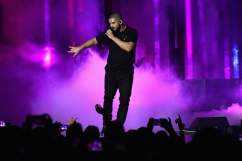 Drake’s Net Worth: 5 Fast Facts You Need to Know