Ed Sheeran at The BRIT Awards on February 22, 2017 in London, England. (Photo by John Phillips/Getty)

Ed Sheeran has long developed a reputation for being a nice guy, and he proved it once again on his world tour.

The “Shape of You” singer was contacted by the family of Ollie Carroll, a six-year old boy who is suffering from Batten Disease, a rare and degenerative condition. According to Carroll’s mother Lucy, Ollie is a huge fan of Sheeran, explaining that “he once knew all the words to Ed’s songs, who used to sing along, can no longer talk.” She went on to say that Ollie, who used to “stand at the television watching Ed’s videos, can no longer stand and see. The power of Ed’s voice has pulled [him] through the hardest and darkest of times.”

Sheeran poses with Ollie Carroll and his father Mike.

In response to this tragic development, Sheeran responded to the family, and invited them to come backstage at his concert in Manchester. The meeting turned out to be one packed with emotion, according to a report by The Mirror. “As soon as Ed walked into the room and spoke, Ollie’s eyes lit up and a smile spread across his face,” said Lucy, “Ed spent time with Ollie and gave him the biggest of cuddles, he had high fives with [Ollie’s sister] Amelia, who was completely in love and couldn’t stop staring at him.

Watch a video clip of Ollie singing along to one of his favorite Sheeran songs, “Thinking Out Loud,” which won Song of the Year and Best Pop Performance at the 2014 Grammy Awards.

“Ed is one of the loveliest guys we have ever met, he asked us to explain Batten Disease and Ollie’s Army,” she continued, “As parents, we can not thank Ed, his team, and every single person who shared Ollie’s video enough. Our dying boy wished to meet his hero, that wish was granted.”

This isn’t the first time Sheeran has reached out to a terminally ill fan. In 2016, he visited Melody Driscoll, a 9 year-old suffering from the neurological disorder Rhett Syndrome, at a hospital in Southeast England. According to Billboard, the singer even brought a ukelele along with him, and performed an impromptu version of his 2014 single “Photograph” for Driscoll. Watch the video here. 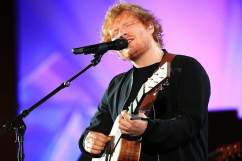