It’s safe to say that the first annual Fyre Festival was a disaster.

The festival, run by tech entrepreneur Billy McFarland and hip-hop artist Ja Rule, promised a weekend of luxury, with ticket packages costing up to $250,000 per person and musical acts like Blink-182 slated to perform. Now, however, Fyre has reportedly stranded thousands of its visitors on an Island in the Bahamas, without food, water, or functioning electricity.

Needless to say, twitter has had an avalanche of material to work with, many of which have been aimed at the face of the event: Ja Rule. Some have compared the Fyre Festival to Lord of the Flies (1954) and joked that Ja (born Jeffrey Atkins) has lured people to an island to live out the ‘man hunts man’ scenario of the novel The Most Dangerous Game (1924). Check out this and more of the best Twitter reactions to Fyre Festival, and Ja in particular, below.

Fyre Festival has people stranded on an island looking at Ja Rule like.. pic.twitter.com/UMDStyx4zV

This is hilarious ??the "luxury" dinner Ja Rule gave his festival goers https://t.co/9GqDypIUig

quick summary of #fyrefestival:
Ja Rule and dozens of Instagram models lured trust fund kids to an island and are now hunting them for sport

If you told me yesterday that Ja Rule would start a prison camp for Instagram kids in the Bahamas, I woulda called you mad. #fyrefestival

Some have also pointed out the odd, cryptic response Ja Rule has had to the festival’s location. “Stop asking questions about the island,” he writes, “you will not find the island on any map. The island is everywhere and nowhere.” With thousands stranded, however, this claim has only led to mockery over much mystique Ja is trying to conjure up.

Ja Rule is truly a hero. He showed rich kids the food and shelter anxiety that millions of Americans feel daily. #fyrefestival

People really thought it was a good idea to spend a bunch of money and fly to an island because Ja Rule said so? https://t.co/6l0lUzv6oH

Others claim that Ja has some legal issues coming his way as a result, and he should get to running…

They shoulda seen it coming when JaRule was named as one of the organizers/promoters of #fyrefestival pic.twitter.com/LJwFud30z5

A small sect of people are even putting forth the theory that Ja is some sort of libertarian icon or Robin Hood figure for orchestrating such a massive event. “Rich stupid white kid social experiment,” writes one user, “Kudos Ja Rule, greatest punk’d episode ever.”

Okay. Is it possible that #fyrefestival is a total goth experiment by Ja Rule? If so it's genius.

Then, of course, there’s this amazing theory, which ties into Ja Rule’s character from the 2001 film The Fast & The Furious:

UPDATE: Ja has since released a statement on his Twitter account, saying: “I truly apologize as this is NOT MY FAULT… but I’m taking responsibility I’m deeply sorry to everyone who was inconvenienced by this..” read the full statement below. 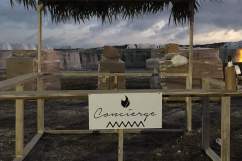 Read More
Ja Rule, Twitter
With Fyre Festival turning into a disaster, Twitter has set its sights on the man behind the event: Ja Rule.