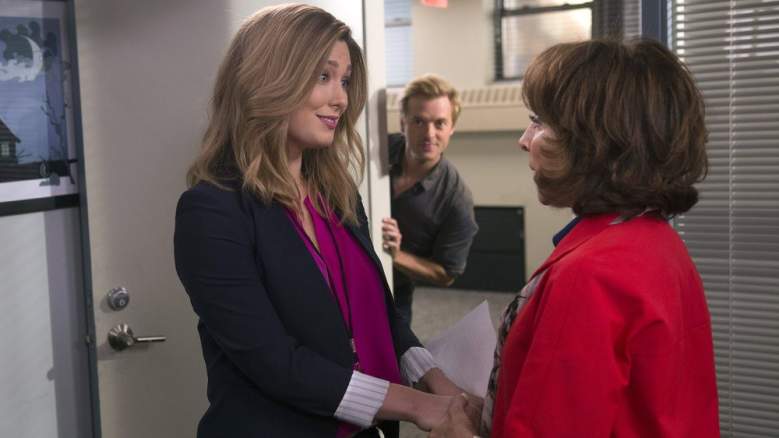 Great News has been described as a mix of 30 Rock and Nancy Meyers’ 2015 film The Intern. It stars Briga Heelan (Ground Floor, Cougar Town) as Katie, a cable news producer who is horrified to learn that her over-sharing mother Carol (Emmy-winner Andrea Martin) is interning at her show, The Breakdown. Considering that she has to deal with blowhard veteran anchor Chuck (John Michael Higgins), a self-obsessed younger anchor Portia (Nicole Richie) and her executive producer Greg (Adam Campbell), this is the last thing she needed.

Like NBC’s other late-season comedy Trial & Error, the network is burning through this show really quickly. The first two episodes will air on April 25 following The Voice. NBC will continue airing two episodes a night until the first 10 episodes are finished.

The second episode is titled “Bear Attack,” in which Katie volunteers to cover the escape of a bear until Carol gets in the way. Meanwhile, Greg tries to get Portia and Chuck to look like friends for the show’s audience.

CHANNEL: NBC (To find out which channel NBC is for you, click here to go to TVGuide.com. Then, change “Provider” to your cable/satellite provider.)

“Pilot” – “Katie (Briga Heelan), a frustrated cable news producer, is horrified when her mom, Carol (Andrea Martin), gets an internship at “The Breakdown.” Despite Katie’s best efforts, Carol is instantly beloved by the entire office, including blowhard veteran anchor Chuck (John Michael Higgins). But when Katie hits a roadblock while producing a big story, she realizes that maybe having a mom at work isn’t such a bad thing.”

“Bear Attack” – “Katie (Briga Heelan) tries to set workplace boundaries with Carol (Andrea Martin), but when a big story about an escaped bear lands in her lap, her mom can’t help but meddle. Meanwhile, Greg (Adam Campbell) tries to get Chuck (John Michael Higgins) and Portia (Nicole Richie) to do a little friendly banter at the end of the show.”