According to TMZ, the “2 Phones” rapper was sentenced 30 months in jail over felony gun charges. Gates reportedly pleaded guilty to the charges after his bail was denied earlier this month at a Bridgeview Courthouse hearing. TMZ reports that he is now in the process of being transferred to the Illinous Department of Corrections.

This is only the latest of many legal issues that Gates has faced over the years. In 2015, the rapper kicked a female fan during a concert in Florida. He was subsequently charged with battery, and sentenced to 180 days in prison. Watch Gates (born Kevin Jerome Gilyard) discuss his jail time in an interview with The Breakfast Club below.

What makes this sentence all the more crushing for Gates and his legion of fans is that he was on the brink of freedom as recent as last month. The rapper finished his initial six-month sentence, but upon leaving jail, authorities discovered an outstanding felony warrant for a weapons charge in Illinois. The warrant was originally issued in 2013, according to XXL, but Gates failed to appear at his scheduled court date.

Hot New Hip Hop reports that Gates saw less than 24 hours of freedom in between, and had to cancel all of his scheduled concerts, including a headliner slot at the Hippie Festival in San Francisco, California on April 20th. Despite the news, attorney Hershcel Rush told TMZ that they are “very pleased with the sentence of 30 months,” as the rapper’s charges had the potential to land him 10 years in prison.

Gates’ debut studio album, Isaiah, was certified platinum last year, despite having no major guest features. Watch the music video for his lead single “2 Phones,” which peaked at number 17 on the Billboard Hot 100, below. 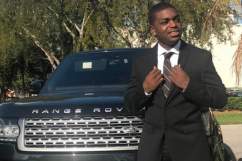