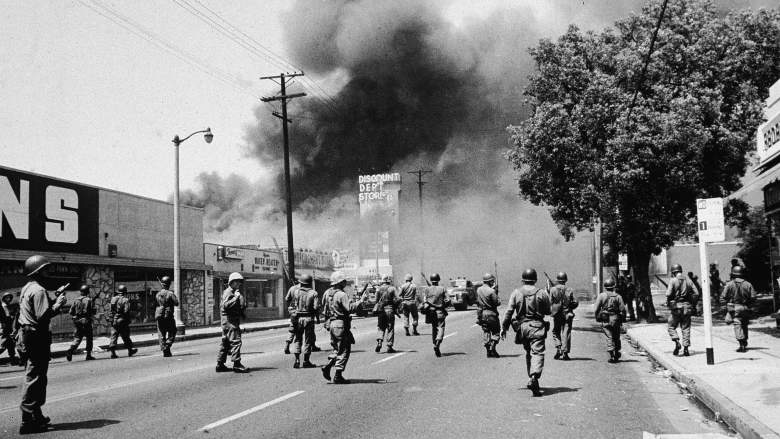 Armed National Guardsmen march toward smoke on the horizon during the street fires of the Watts riots, Los Angeles, California, August 1965. (Getty)

After the acquittal of four white police officers in the beating of Rodney King, the city of Los Angeles erupted into violence, fires, and beatings. Tonight, the Smithsonian Channel will air a new documentary titled The Lost Tapes: LA Riots, which comes from the mind of an LA reporter who covered the news at the time, Tom Jennings.

In an interview with WBUR, Jennings spoke about his personal experience covering the riots. “… I recall being out that night, the first night, where the city went up, and I can’t tell you exactly where I was… But there were gunshots on the street… And that’s when it started to become real… I actually wound up ducking into a storefront, kind of crouching down, wondering, ‘What am I doing here?’ And I thought, ‘I’m in Los Angeles, I speak the language, I know all the streets. I should be safe here. I no longer want to be a war correspondent.'”

The documentary will feature never-before-seen footage captured in the midst of the riots from both the LA police and fire departments, and will be followed by a special on the History Channel, titled The LA Riots: 25 Years Later.

DURATION: 1hr, followed by a look at the LA Race Riots on the History Channel. (Synopsis for the History Channel special: A study of the racial uprising in Los Angeles on April 29, 1992, features interviews with citizens, politicians, law enforcement, rescuers and those who committed crimes.)

TV CHANNEL: Smithsonian Channel – Click here to find out what channel Smithsonian is in your area.

SYNOPSIS:  A look at the 1992 L.A. Riots, revisited through television and radio reports, home video, and police footage.