Drake is notorious for his love life, as he’s been romantically linked to celebrities like Rihanna, Serena Williams, and Jennifer Lopez in the past. Now, however, it seems as though the rapper has come under from dance and former stripper Layla Lace.

Lace took to Instagram on Monday to make the shocking claim that she is pregnant with Drake’s child and that he is ignoring her: “So I guess still in this era this is the new thing that after you tell a dude you pregnant they stop answering they phone!!!! One lesson I have learned out of the whole situation is to never be so naive when a guy disrespect you!!” Lace went on to mock Drake’s positive persona in the media, saying “I should have ran for the hills but no I felt (sic) for the “Good Guy” image that this a*s hole portrayed to be. What a #Fraud I feel so stupid!!! I never told this man “No” I did everything he told me to do Smfh!!!!”

Lace claims that she had a fling with the “One Dance” rapper earlier this year, and that they were introduced to each other by his friend DJ Spade. “I had to remind my self that this man was once a “Actor” So why the hell did I fall for his bullsh*t,” she added, “What makes matters worst is that when you try to be private about sh*t and keep ya mouth shut nobody cares!!! It’s ashame (sic) that I even have to come out of my character!!!”  Lace also threw in a very direct “F*CK YOU DRAKE” for good measure.

#Drake got some explaining to do ? (swipe for more)

While these allegations have yet to be confirmed, Lace saw fit to attach photos to her Instagram post, including text messages between the two of them and paperwork regarding the pregnancy. The texts prove particularly interesting, as the conversations are dated “February 25th” and “March 8th,” and seem to support Lace’s story that her and Drake were an item. The rapper has yet to comment.

UPDATE: DJ Spade spoke up on the matter of Lace’s pregnancy, and revealed a screenshot from what was allegedly a private conversation between the two of them. The screenshot suggests that Lace planned the entire pregnancy claim to get money out of Drake, writing “Publicity will make me $ even if he don’t want me.” Lace took to Instagram to say that Spade’s screenshot is a fake. Check it out below. 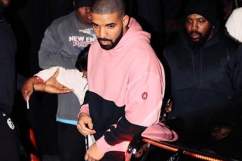