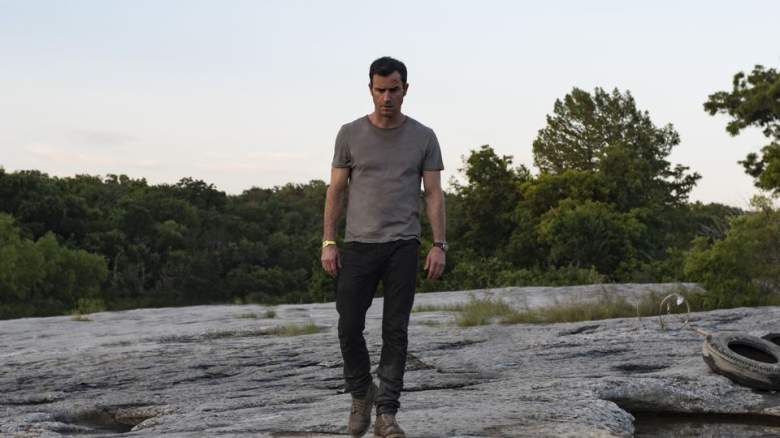 The Leftovers is one of those incredibly deep shows that you have to watch scene by scene in order to catch all the things you might miss. So for this article, we’re going to delve into the major clues left during the premiere episode, the biggest revelations, and what they might mean. This post has spoilers through the Season 3 premiere.

Here are the biggest clues (and unanswered questions) from the premiere. Let us know your theories and ideas, along with anything else that should be pointed out, in the comments below.

Is Kevin Killing Himself Every Day or Visiting the Other Side?

In a particularly chilling scene, we saw Kevin opening a box marked “cufflinks” and taking out a plastic bag. He taped it around his neck and appeared to asphyxiate himself. But later he walked out of his house just fine. From last season, we learned that he doesn’t seem to be able to die. From that time he tied a stone around himself and dropped into the lake, and an earthquake hit and emptied the lake, he’s seemingly been unable to die. He was poisoned and came back. He was shot in the chest and ended up just fine. Matthew is predicting that he can only not die as long as he’s in Miracle. But is that really true?

Some viewers think Kevin is testing every day to see if he’s still incapable of dying. But others think he’s visiting the other side every time he does this, like he did in Season 2.

This leads to the other big question: Is Kevin a “Jesus” character? Is he a supernatural-like Savior now? Or a prophet? Or are Matt, Michael, and John crazy for thinking this? Matt is so positive that he’s created a Book of Kevin to document what’s happening. Indeed, there is likely something very supernatural about Kevin. We know that some type of creature appears to be communicating with him (or did in Season 2), just like they did with his dad. And that being might be what’s keeping Kevin from dying. But exactly what it is and what role it played in the Departure isn’t known.

Why Was Michael Researching Mapleton?

Michael didn’t want Kevin to know that he was researching Mapleton. But Matt knew. Later we find out that Matt’s wife, Mary, is leaving him and going back to Mapleton, where she may or may not survive. Were they researching Mapleton just to try to figure out what she would be coming back to? Or is there something going on in Kevin’s hometown that we don’t know about? And why would they want to keep that from Kevin?

What happened to Lilly? Did Wayne take her back? #TheLeftovers

You may have noticed that Nora and Kevin’s adopted miracle child, Lilly, is nowhere to be seen. It’s unclear what happened to her. But Erika, John’s former wife, is also gone. It’s possible this isn’t coincidence, and Erika took Lilly with her. Others believe that Christine or Wayne’s people came back for Lily, or her biological mom decided she wanted her back.

"Dogs are taking on human form and infiltrating the highest levels of our government."

So Dean went a little crazy and now believes that dogs have morphed into people and are taking over the world, set on its destruction. He’s been killing dogs since Season 1, saying that they weren’t the same since the Departure. And indeed, dogs who saw their owners depart seemed to go crazy and wild. But is there even a grain of truth behind Dean’s crazy theory? Although anything can happen in this world, probably not.

We Learned How Evie and Much of the Guilty Remnant Died

We learned at the beginning of the episode that many of the Guilty Remnant members died because a UAV drone strike was called down on their location. Evie watched as it happened and died on the scene, although John refuses to believe it. The whole thing was covered up and the residents were told they died because they lit a cigarette, causing a gas explosion. Kevin repeated this lie to his son, but his son didn’t buy it.

The 1844 Scene Was Straight Out of History

The producers have said that the opening scenes should be seen as a thematic interlude of sorts, pointing out themes ongoing in the series, such as acts of God, faith in God, families that emerge from destruction, and the like. However, the Season 3 opening scene from 1844 was also likely straight out of history. The Great Disappointment is the name of a Millerite movement occurring after Preacher William Miler declared that Christ would return in 1844. He originally guessed sometime between March 21, 1843 and March 21, 1844. When that didn’t happen, he guessed April 18, 1844. Later, he guessed October 22, 1844, and it didn’t happen, leading to a “great disappointment” and loss of faith for many.

Norah Is Collecting Doves in the Future

Can you read the messages in the bucket? (HBO)

At the end, we jumped forward in time some more and saw an older Norah collecting doves with messages tied to their feet. However, she’s going by the name of Sarah and is pretending she has no idea who Kevin is. See more details about that crazy ending in the story below.

There are still many questions and points to make about the episode, including:

Read More
HBO, Television, The Leftovers, TV
Read the top theories and clues from the Season 3 premiere of The Leftovers. What happened to Lilly? What did that opening sequence mean? And more.