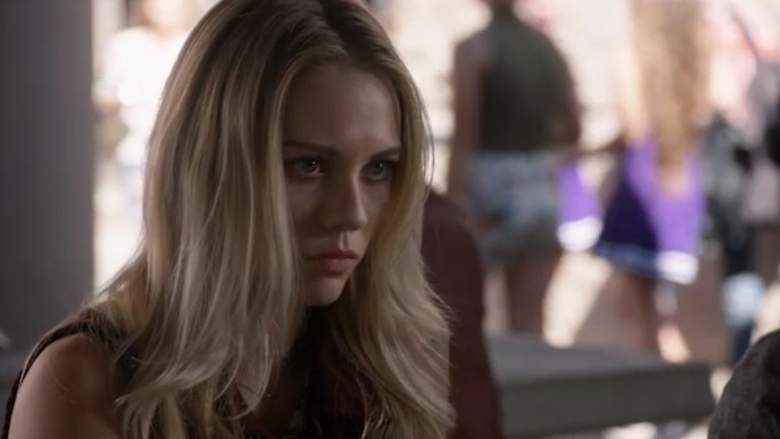 Lifetime returns to one of its favorite subjects with the new movie The Stalker Club. In the film, a group of high school seniors think it’s a great idea to join the titular club, even though their invitation came from a mysterious person. The new film debuts on Saturday, April 22 at 10:00 p.m. ET. Read on for a preview.

In The Stalker Club, Ashley (Kelcie Stranahan) and her friends get a mysterious text message message, inviting them to join The Stalker Club. Since the group is ready for any thrill, they decide to join with no idea about the club’s mysterious past. Twenty years ago, a girl was killed while playing the game, and their parents were all a part of it. Ashley tries to find out who the stalker really was and has to fight to stay alive.

Star Kelcie Stranahan is only 25, but is already a veteran of TV movies. She previously starred in Stalked By My Neighbor, Dirty Teacher, Last Hours in Suburbua and Under The Bed.

Maeve Quinlan, who plays Ashley’s mom, is a veteran of 90210, 3Way, South of Nowhere and The Bold and the Beautiful. J.T. Neal, who plays Darren, previously starred in Roommates, Lucky’s Treasure, The Haunted Hathaways and Lab Rats.

PLOT: “When she started dating her boyfriend, Ashley joined a clique of five cool, adventurous and thrill-seeking high school seniors. Ashley and her new friends all get a mysterious text message inviting them to join a club–The Stalker Club–and they decide to play. Unbeknownst to them, 20 years ago at their high school, a beautiful, popular girl was killed playing the same game–a game that their parents were all a part of. As the game becomes more sinister it becomes clear that someone outside the group of five friends is changing the rules. As Ashley tries to figure out who the stalker is she winds up fighting for her life against someone who is out for revenge and demands blood.”

Read More
Lifetime, TV
In tonight's new Lifetime movie, a group of friends think 'The Stalker Club' is a good idea. Find out when the film starts and meet the cast.