50 Cent is known for being one of the most most aggressive artists in hip-hop, but on Saturday night, he took it to a whole new level.

The “In da Club” rapper performed with The Lox in Baltimore on March 8th. During the gig, he reached into the audience to touch and shake the hands of those in the front row– until, that is, one woman pulled his hand too hard, and caused him to fall off of the stage. 50 (born Curtis Jackson) quickly recovered from the fall, but was noticeably angry at the woman for her actions, and responded by punching her square in the chest. Watch the video footage below.

According to TMZ, 50 Cent threw the punch as a means of freeing himself from the woman’s grasp. Needless to say, the solid hit caused her to let go, and 50 hopped back on stage. The woman has yet to be identified, though the video shows that she was wearing a flower dress. Fortunately, 50 Cent made peace with the woman, asking her to come on stage and dance while he performed the rest of his set. She reportedly twerked on stage not long after.

This isn’t the first time 50 has gotten caught up in a physical altercation during a live show. In 2016, the rapper was performing at Stage 48 Club in New York City when a massive fight broke out in the audience. 50 played it cool– until, that is, an audience member attempted to grab him by his shirt. According to TMZ, 50 reacted with the swiftness and put his attacker down but quick. You can watch the video for that altercation right here.

50 also participated in a hectic brawl during Summer Jam in 2014. An unknown man was beaten and reportedly robbed by members of 50’s entourage on stage while the rapper continued performing his set. The man was later revealed to be a fellow rapper named Slow, who, as part of collective Starbucks, had gotten on 50’s bad side for posting a disrespectful photo on Instagram with his estranged son. Check out the video above. 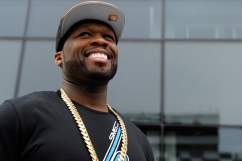