@meldcole captures so many moments of me living my life. I look at the photos and I realize that no matter what rumor came out, no matter who needs money, or who's mad I didn't text them back etcetera etcetera…I smile ALOT every day & I thank God for that. ????????

Trey Songz has had his fair share of controversy over the years, from a 2016 arrest in Detroit to an online feud with fellow artist Nicki Minaj. Now, however, the veteran singer has gotten into a spat with an unlikely candidate: former That’s So Raven actor Orlando Brown.

Brown posted an Instagram video of himself on Wednesday morning, where he went on a verbally aggressive tirade against Songz. “F*ck you Trey Songz you gay a*s n*gga,” he angrily says, “You wanna pay n*ggas to do some gay a*s sh*t.” The insults didn’t stop there, as Brown proceeded to call Songz “a gay a*s b*tch” and ask “Realistically when have I seen you with a b*tch and not a d*ck?” The actor closes the rant by saying that Songz is “always running around trying to f*ck with Orlando and sh*t.” Brown offers no proof of these claims for the duration of the video.

Oddly enough, this isn’t the first time Brown has fired verbal shots at the singer. In February, Songz was faced with accusations of sexual harassment from actress Keke Palmer. According to E! News, Palmer claimed that the singer used sexual intimidation as a means of tricking her to appear in the music video for his single “Pick Up The Phone.” “Just cause you give someone food and alcohol and throw in a little sexual intimidation doesn’t mean they will buckle,” she wrote on social media. Read the full post here.

Brown then posted an Instagram video insulting both Songz and Palmer. “Everybody knows that Trey Songz sucks d*ck,” he exclaims, “he don’t want you!”

Those who have followed Brown’s career after That’s So Raven know that the actor has been increasingly erratic in his public behavior. In 2014, he was charged with disturbing the peace and public intoxication. TMZ claims that he showed up an unknown woman’s apartment in North Hollywood and began threatening to kill her and her family. Two years later, he was charged with battery and drug possession. According to Hollywood Life, was seen striking his girlfriend in a parking lot and was found to have methamphetamines on his person during the arrest.

As for Songz, he has yet to respond to either of the profanity-laced videos. 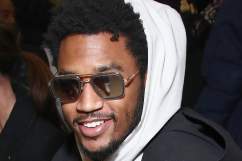 Trey Songz Is in a Sex Tape Scandal