Skrillex (born Sonny John Moore) is known for his anthemic music and loud, blaring instrumentals, but it seems as though the superstar DJ may have gone a bit too far.

On Wednesday night, Skrillex was reportedly driving down the Sunset Strip in his Tesla SUV. Blasting music– his own music, in fact– out of the vehicle, he was subsequently pulled over by LAPD due to the noise. What seemed like a routine violation quickly turned awry, as Skrillex did not have his I.D. on him, and the officers were forced to order him out of the car and slap handcuffs on him.

As you can see in the clip above, the artist behind hit singles like “Scary Monsters and Nice Sprites” (2010), “Bangarang” (2011), and “Make It Bun Dem” (2013) doesn’t seem pleased by the confusion. The bystander recording the video on her phone even attempts to identify him for the police, though it proves to no avail. According to TMZ, however, the police eventually figured out he was in fact Skrillex, uncuffed him, and sent him on his way with minor violations for noise and driving without proper I.D.

Skrillex hopped on Twitter to address the situation, saying “leave it to me to play my music too loud, these new demos are [fire emoji] tho.” The DJ also shouts out Elon Musk, the creator of the Tesla SUV, joking that the system in the vehicle is just too [fire emoji].” Check out the original tweets below.

Leave it to me to play my music "too loud" ..these new demos are ? tho @elonmusk https://t.co/E6vob2j1ir

.@elonmusk ur system in the tesla model x is just too ????

This isn’t the first time Skrillex’s music has gotten him in trouble. In 2015, he and Justin Bieber were sued over the smash hit “Sorry,” which, according to singer Casey Dienel, bore a strong resemblance to her 2014 song “Ring the Bell.” Dienel cited the “unique characteristics of the female vocal riff” on “Sorry” as proof, although the lawsuit still has yet to reach a conclusion. 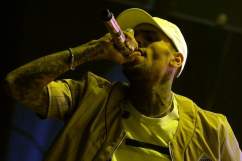