Harry Styles‘ self-titled album is steadily approaching release, and to be expected, fans are eagerly anticipating it.

The singer’s debut single “Sign of the Times” was decently received by fans, and second single “Ever Since New York” has been gaining buzz for its supposed ties to a past relationship that Styles had with Taylor Swift in 2012. And while the song’s lyrics ultimately prove that to be untrue, the singer did reveal that an ex-girlfriend does indeed play an important part in the album.

One Direction's Harry Styles appears on our cover and talks with Cameron Crowe for the story. Read it in full here https://t.co/KceV5Qp2CY pic.twitter.com/J7iXqgcoCX

In a new interview with Rolling Stone, the former One Direction star explained that a large portion of the album was influenced by an ex-girlfriend. “She’s a huge part of the album,” says Styles, “Sometimes you want to tip the hat, and sometimes you just want to give them the whole cap… and hope they know it’s just for them.” He neglected to mention just who that ex-girlfriend could be, but some are theorizing as to her identity.

The look every boys want from Taylor❤️

Styles’ dating history is an illustrious one, with ties to actress Georgia Fowler, fellow pop star Swift, and models Sara Sampaio and Nadine Leopold. He discussed his romance with Swift in detail, saying that the amount of attention they received at the time was overwhelming: “Relationships are hard, at any age. And adding in that you don’t really understand exactly how it works when you’re 18, trying to navigate all that stuff didn’t make it easier… It was a learning experience for sure.” Given the briefness of their time together, however, it seems safe to assume that the “Shake It Off” singer is not the mystery ex in question. 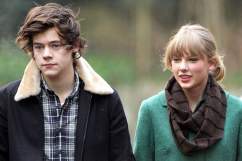 Is Harry Styles’ New Song ‘Ever Since New York’ Really About Taylor Swift?

And while the odds are slim that Styles’ first relationship is the answer, the singer did find time to reveal some personal details, saying: “My first proper girlfriend used to have one of those laughs. There was also a little bit of mystery with her because she didn’t go to our school. I just worshipped the ground she walked on. And she knew, probably, to a fault, a little. That was a tough one. I was 15.” Turns out, the woman that fans seem to be leaning towards the most is reality TV star Kendall Jenner.

The two were first linked in 2013, when they were spotted on a series of dates, public appearances, and even a caribbean cruise together. Neither have gone on the record to address their relationship over the years, and Jenner has recently been seen with rapper A$AP Rocky, but according to outlets like CelebsNow and Rolling Stone‘s Cameron Crowe (who conducted the interview), she poses the strongest candidate.

We’ll all know for sure when Styles’ album comes out on May 12th. You can pre-order it right here. 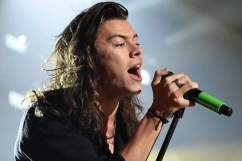 Did Harry Styles Rip Off A 70’s Song For His New Single?