Arrow got an early renewal for a sixth season this year. The news was announced in January, and was met with cheers from the cast, crew, and fans.

Arrow is the oldest of the superhero shows on The CW. After its premiere came shows like The Flash, DC’s Legends of Tomorrow, and Supergirl.

According to the EconoTimes, it’s possible that the major villain of next season will be teased in tonight’s finale. Speaking of which, we’ll see many familiar faces on tonight’s episode when Oliver travels back to Lian Yu. According to FanSided, he could be welcomed by his team of Malcolm Merlyn, Nyssa al Ghul, Deathstroke, and more. The consequences of whatever happens in Lian Yu will be the subject of season six of Arrow.

New members will join Team Arrow tonight, and help Oliver Queen defeat (or at least, attempt to defeat) Prometheus once and for all. At the end of last week, Prometheus had managed to kidnap all five members of Team Arrow, and in the promo for this evening, Oliver can be seen walking side by side with former villains, like Deathstroke and Captain Boomerang, to help him get his friends back.

On May 20, Stephen Amell took to Twitter to reveal that there’s also a surprise cameo appearance that hasn’t been featured in any of the previews. “Love this person so much for coming back,” he says in the post.

Be sure to check out the season finale of Arrow tonight on the CW at 8pm ET/PT. 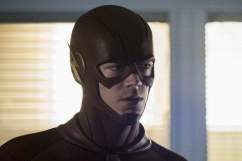