Tonight is the season 7 finale of Blue Bloods, and fans across the country are wondering if and when the show will be returning for season 8.

On March 23, 2017, Deadline reported that CBS had given Blue Bloods early renewal for an eighth season. Although the network hasn’t officially announced just when the premiere will be, previous patterns suggest you can look forward to seeing the show again in the fall.

The series, which hit its 150th episode milestone in March, raked in a 1.8 rating among adults for season 7, with 13.8 million viewers. In a recent interview with Parade, Tom Selleck, who plays Police Commissioner Frank Reagan, spoke about the season finale, during which he will be forced to make a decision to intercept the shipment of millions of dollars heading to a drug cartel in Mexico. The consequence of his actions is trouble for his family. Selleck tells the outlet, “I think there is a life lesson in this and we will see where it goes next season. I think the unanticipated consequence in Danny’s realization that there can be consequences to the family.”

Season 8 will also delve into Mayor Poole and Frank, whose relationship will take an unexpected turn on tonight’s finale. Selleck dishes to Parade, “Frank has always had an adversarial relationship with the mayor, but in some sense, there is such a mutual respect between them… but there seems to have been a change. I like that it is a big surprise and leaves it open for next season.”

So how long will the show run for? In an interview with the New York Post, Isaiah Washington, who plays chief Travis Jackson, dished, “I just heard ‘Blue Bloods’ got picked up for Season 8, and I’m hearing they’ll try to do 10 [seasons], so I have a funny feeling that my character may show up within the next three years.” If Washington is correct, that means fans will have another few years of the show to look forward to.

In his interview with ET, Selleck said that he doesn’t know quite where the writers will go with his character, but he trusts that they’ve got a lot of material to work with. “I know [the writers] are mulling over ideas, and they call me saying, ‘What do you think?’ But I have a hunch the Reagans don’t stand down…We are far from out of ideas. There are lots of characters to grow and change, so what happens [in the finale] is important, but not as important as how it lands.”

Selleck also divulges that in no way does it feel like the show is nearing its end. “We’re not out of ideas,” he tells ET. “I think the show has incredible potential. I know all our deals are up at the end of eight seasons, and I don’t want to think anything, but I think CBS would be crazy not to continue it.”

The season finale of Blue Bloods will take place on Friday at 10pm ET/PT on CBS. Fans can expect season 8 to premiere in the fall. 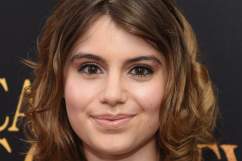