Broke away for the farm for a day at the Oregon coast. amazing beauty! Love love to you all.

Matt Roloff and his girlfriend Caryn Chandler knew each other for a while before ever dating as she is his farm manager. According to Roloff’s ex-wife Amy, Chandler has been a family friend and an assistant to Roloff. In turn, Amy is not so happy about the couple’s relationship as she revealed on Little People Big World:

Fortunately, not all of the family is as hurt by the couple’s relationship. After all, Roloff and Chandler threw Roloff’s son Zach and his wife Tori a baby shower for their first child.

Roloff announced that he was dating Chandler about a year after his divorce was settled.

While Matt Roloff has moved on, so has Amy Roloff, who is dating boyfriend Chris Marek. Last season on Little People Big World, we saw the two start hanging out together. When the couple first started dating, Amy’s daughter Molly told the cameras that:

I think we all worried a little bit about our parents going through a divorce like that and especially coming right as we’re all moving out. That’s already hard for parents. I’m glad my mom is getting out. I think that’s good because it would be really easy to just kind of get stuck.

We’re officially dating, yes. It’s been fun! Amy and I are getting along great.

Marek has also said that he has met all of Roloff’s children except for daughter Molly, who recently became engaged.

Though Amy and Matt Roloff are divorced and have moved on, they both still live on the same property. 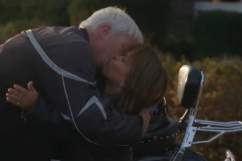