David Norton and Vanessa Nelson are the focus of Lifetime’s new spinoff series, Married at First Sight: Second Chances. The fan-favorite pair appeared on last season of the show, where they married complete strangers chosen by relationship experts.

Neither David nor Vanessa’s marriage lasted, but both are willing to put their hearts on the line for another shot at love.

Read on to learn more about David Norton and Vanessa Nelson.

1. They Both Married Strangers on Season 3 of ‘Married at First Sight’

On season 3 of Married at First Sight, David and Vanessa married complete strangers who they ended up divorcing. In the spin-off series, Married at First Sight: Second Chances, both will go on multiple dates with the help of Dr. Pepper Schwartz, Pastor Calvin Roberson, and Rachel DeAlto, who will help them find Mr. and Mrs. Right.

In an exclusive interview with People, David said, “I am grateful to be given a second chance at finding love and can’t wait to share my journey with the fans of Married at First Sight… I’m excited to experience this next chapter in the story of finding ‘Mrs. Right.’ Hopefully this next chapter will be the last!”

In April, Vanessa opened up to People about what it was like dating so many men at once on MAFS: Second Chances. In a piece penned by Nelson herself, she divulged, “What would you do if you had a line of guys waiting to meet you? Freak out! I was so excited and flattered that so many men wanted a few minutes just to meet me. I also tried not to panic about meeting 100 guys in one day. I’m a hard-working lady, but speed dating this many guys should be a world record. If I can give any advice about speed dating, it’s keep an open mind, lots of energy drinks and have fun!”

Vanessa and Tres were the only couple who chose marriage on the Season 3 finale of Marriage At First Sight, but on the “Six Months Later” reunion special, it was revealed that the two had gone their separate ways.  In March, Vanessa spoke to US Magazine about the experience, and what it was like coming to terms with the fact that her marriage wasn’t working. “Initially, I was really upset. It took me a few months to stop hoping we would reconcile.”

She says that Tres ultimately made it “clear that he was not interested in reconciling,” which forced her to move on. “I wish I would’ve known earlier that Tres didn’t have feelings for me, so that I could make the best decision for myself,” she says. “I also wish I would have communicated more effectively.”

Vanessa admits it was difficult watching the show on TV and seeing how happy she was for her and Tres’ future. Fortunately, Vanessa is ready to get back on the saddle this season and open her heart up to the chance of finding love.

3. David and Ashley Divorced During Season 3

David and nursing student Ashley Doherty decided to divorce during season 3. Things seemed doomed from the start– after Ashley first walked down the aisle, she told cameras she wasn’t physically attracted to David and later went and hid in the bathroom. “He’s not the typical look that I normally date,” she explained. “The men that I date usually have dark hair, usually dark features.”

David seemed adamant on giving their relationship another go– he told the show’s experts he “knew” love existed in the relationship, and that Ashley was “absolutely stunning, just gorgeous.” After she said she felt divorce was the best option for them, David voiced his frustration with Ashley, saying he didn’t feel like she ever gave their romance a shot.

Take it from this guy in the photo…all in all the honeymoons were a great success #MarriedAtFirstSight pic.twitter.com/FZR3yRpD4e

Last March, In Touch obtained police reports that shed light on David’s past. According to InTouch, David pleaded guilty to a misdemeanor charge of disorderly conduct in 2008, but Ashley was unaware of this– she was told that background checks were conducted to make sure no one had a criminal record. According to the reports, David’s ex claims he “grabbed” her and “pushed her to the ground” during an altercation in 2007.

Mary Harnois, Ashley’s mother, tells the outlet, “I blame the show. [Ashley] feels like she was let down in a big way because they told her they do background checks. So when someone tells you that, you’re like, ‘Okay, well at least they won’t have a criminal past.’” A written request for David’s court case was reportedly submitted on June 4, 2015, but the records weren’t sent until the end of June– after David and Ashley had already tied the knot.

A&E eventually learned that In Touch had obtained the police reports, leading David to speak out about the situation. “I never hit anyone… I was cited for disorderly conduct and I ended up attending one two-hour class. Neither my girlfriend nor my brother ever filed charges.”

Vanessa works as a corporate events manager, and describes herself as a woman who wears her heart on her sleeve.

The 28-year-old graduated from Clark Atlanta University, where she earned her masters in communications. She is the founder of XO, Vanessa, which “works to provide inspiration to women everywhere to achieve their goals and be their best selves.” According to her website, Vanessa was accepted to the Yale Writers’ Conference for travel and food writing.

Last weekend, Vanessa was spotted in Atlanta wearing a huge rock on her ring finger, leading fans to suspect she may be engaged. A source told People, “She took photos with some fans who recognized her, but you could tell she was trying to be incognito… She was sitting at the table with a hat and sunglasses on through most of her meal.” 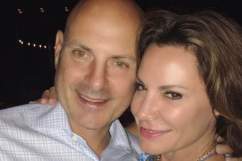 Read More
Celebrities, Lifetime, Reality TV
Lifetime's Married at First Sight: Second Chances features David Norton and Vanessa Nelson, who both separated from their previous MAFS spouses and are on the hunt for true love.