Dwayne “The Rock” Johnson used this weekend’s Saturday Night Live to make fun of the rumblings that he might run for political office. Of course, The Rock only has himself to blame, since he’s said in recent interviews that he might consider running for president.

Johnson also joined SNL‘s Five-Timers Club and picked fellow club member Tom Hanks as his running mate. The two actors said they are one of only two things people still can agree on in this country. (The other thing is pizza.) Hanks would get the elderly vote because he’s fought in World War II in so many movies. Johnson would win the minority vote because everyone pretends the Rock is what they are.

America, I hear you.

Tune in TONIGHT for our season finale of @nbcsnl for suprises and big laughs. #SNLFinale #5xHost #2020 ????? pic.twitter.com/EdEgDwXX4V

Johnson even made reference to this in the above tweet, which was sent a few hours before the episode began. Johnson said in a GQ interview published earlier this month that running for office is a “real possibility” for the wrestler-turned-actor.

“A year ago, it started coming up more and more,” the Baywatch actor told GQ. “There was a real sense of earnestness, which made me go home and think, ‘Let me really rethink my answer and make sure I am giving an answer that is truthful and also respectful.’ I didn’t want to be flippant—‘We’ll have three days off for a weekend! No taxes!’”

On May 16, a Public Policy Polling poll showed that Johnson could beat Trump in the 2020 presidential election if he chooses to run. The registered Republican would get 42 percent of the vote, while Trump would get 37 percent of the vote. However, 21 percent of those polled were not sure who to pick in that hypothetical match-up. The poll was also referenced during “Weekend Update.”

I will follow @TomHanks to the end of the earth. #SNL pic.twitter.com/iNLV7PG9EL

“Personally, I feel that if I were president, poise would be important,” Johnson said in his GQ interview. “Leadership would be important. Taking responsibility for everybody. [If I didn’t agree with someone] on something, I wouldn’t shut them out. I would actually include them. The first thing we’d do is we’d come and sit down and we’d talk about it. It’s hard to categorize right now how I think he’s doing, other than to tell you how I would operate, what I would like to see.” 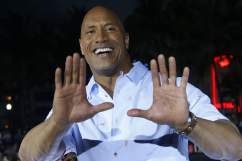