The Billboard Music Awards of 2017 are in full swing and E! News is at the center of the action, with live red carpet coverage. For those of you who are big followers of E! News, we have all the info on how to watch the E! Red Carpet programming, the schedule rundown of E!’s BBMAs footage and Fashion Police details for the event. In addition, the BBMAs have a red carpet live stream available before the show. Check out all the information you need to know below.

The T-Mobile Magenta Carpet Live at the BBMAs

Live From The Red Carpet: The 2017 Billboard Music Awards

Here are three reasons (there are actually a million) that our hosts @Ludacris and @VanessaHudgens want you to watch the #BBMAs tonight!

Jason Kennedy, Sibley Scoles, and Erin Lim are hosting the Live From The Red Carpet: The 2017 Billboard Music Awards Special on the E! Network. According to E!:

E! News’ Jason Kennedy and Sibley Scoles will deliver the most talked about live interviews with some of the biggest names in music including Nicki Minaj, The Chainsmokers, and Camila Cabello, as well as all of the spontaneous, can’t-miss moments from the red-hot red carpet. Host of E! News The Rundown, Erin Lim, will break down the A-list arrivals and fashion choices, while keeping viewers in-the-know on the buzziest social media action in real time.

Tomorrow night at 8 p.m. ET/PT, Fashion Police: The 2017 Billboard Music Awards will air, with Melissa Rivers, Giuliana Rancic, Brad Goreski, NeNe Leakes, and Margaret Cho commenting on the biggest fashion moments and don’ts of the evening. Lea Michele and Fifth Harmony’s Ally Brooke will be special guests on the show.

In order to follow E!’s coverage of the BBMAs via social media: 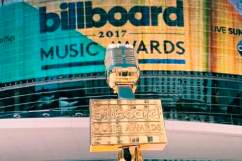