On the last couple episodes of Keeping Up With the Kardashians, Scott Disick has been caught by the Kardashian-Jenner family, sneaking girls in on family trips. But, it looks like now, Disick is being more open about his dating life. Over the years, he has had his ups and downs with the mother of his children, Kourtney Kardashian. There have been countless stories and rumors surrounding the two when it comes to their relationship status, but it looks like there are no plans for reconciliation any time soon. Recently, Disick has been spotted out with his new reported girlfriend Ella Ross. Get to know more about Ross, her connection to Disick and Disick’s love life in our 5 fast facts below.

1. Ross Is a British Model

According to Hollywood Life, Ella Ross, 19, is a British model, who hails from Sussex, England. Currently, however, she is living in Los Angeles. Her Instagram profile states that she is signed with Wilhemina Models and previously, she was signed to agency Storm. In addition, it says that she is making a career as a personal wardrobe and events stylist as well.

Asos previously reported that Ross also is in fashion design. She attended the London College of Fashion, studying Fashion Bags and Accessories Design. In addition, she has had her own brand called Ella Ross London.

2. Apparently Disick Had Hope That He Would Get Back Together With Kardashian

#ScottDisick and Model #EllaRoss Spotted Out Together Several Times, Is something going on between Scott Disick and British model Ella Ross? pic.twitter.com/vOhL2L8Njx

On Instagram, fans have seen photos of Disick and ex Kourtney Kardashian off on trips together with their three kids. This has even puzzled some of their family members, who voiced their concerns on Keeping Up With the Kardashians. Some of Kardashian’s sisters worried that she was giving Disick false hope that they would be getting back together. In the past, Kardashian had said that if Disick “got his shit together,” there was chance for reconciliation. Also, Disick has referred to Kardashian as the love of his life.

During a recent episode of the show, when Kardashian learns that Disick brought a girl with him at a hotel on a family trip to Costa Rica, she is humiliated and angry. It was especially strange to Kardashian’s sisters, who were witnessing Disick flirting and trying to kiss Kardashian on the trip.

Just recently, it was revealed that Kourtney Kardashian has been hanging out with model and former boxer Younes Bendjima. The Kardashian sisters have commented on KUWTK that Scott Disick has a pattern of doing whatever he wants in his personal life, but getting upset when Kardashian does the same. A source told E! that:

Scott doesn’t like Kourtney dating Younes at all. He doesn’t want to see photos of them or know about it. Kourtney has tried to give Scott a heads up that he might be seeing photos, but Scott can’t stand seeing her with someone else, especially Younes.

Bendjima is only 23 years old and a source told People that the couple is not very serious, at least for now. The source stated:

She is single and having fun. She sees him when she has time. Everyone likes him. It’s very innocent.

As for what Kardashian thinks about Disick’s opinion on her dating life, a source has said that:

Kourtney doesn’t care what he thinks. She just thinks he is the last person who should have any opinions about who she is dating. 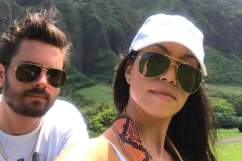 Kourtney Kardashian and Scott Disick 2017: Are They Together or Not?

4. Ross Isn’t the First Model Disick Has Been Spotted With Since His Split With Kardashian

When it comes to Disick and Ross’ budding relationship, a source told E! that:

It’s been casual, but they are really getting to know each other and having fun.

In the past year or two, Disick has been spotted with countless young women, who are usually models like Ross. Lately, however, Disick and Ross have been seen all over Hollywood at restaurants including Tao and Nobu.

This is for you…. Ever wondered why I make YouTube videos? Why Happy Hour exists? Then check out this weeks video now. Also don't forget that the new episodes of Private Parts podcast are out today too!! #happyhour #youtube

Hollywood Life previously reported that Ella Ross dated TV personality Jamie Laing. Many know Laing from Made In Chelsea and apparently he dated some of the women from the show as well. Other shows that Laing has appeared on include Celebrity First Dates, Murder in Successville and Drunk History.

In addition to being a reality star and YouTube personality, Laing is also the McVitie’s biscuit heir.