One of Cosby’s daughters says her father has been “publicly lynched” in the media. In a group of statements that were first played on The Breakfast Club on May 15. Cosby has four daughters with his long-term wife, Camille. They are Erika, Erinn, Ensa and Evin. The couple’s son, Ennis, was murdered in January 1997 in a random attack.

The statements come from Ensa and Erinn.

The first statement is from Ensa, she accuses the media of racism, citing that if the case involved a white man, it would be considered a case of “boys will be boys.” While Erinn Cosby said it was “truly unbelievable” that her father has been found guilty in the court of public opinion. Erinn says she is “ashamed of our country today.” Both daughters maintain their father’s innocence. She refers to the case as being a “money maker.”

Through tears, Erinn Cosby then states that she “does not care” about what people think about her prior relationship with her father. A Washington Post feature from the summer of 2016 recaps when Erin Cosby accused Mike Tyson of rape in 1989. Her father did not support her allegations. Her then lawyer, Louis Terminello, told the Post:

[Bill Cosby] played more of a conciliatory role. She thought he should have handled it more like a father-daughter than like a politician or celebrity.

I don’t think [Bill Cosby] quite looked at it that way. 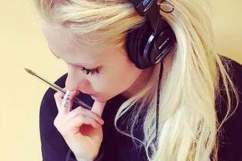