The Voice recently concluded its 12th season this past week, drawing 1.9 viewers and outperforming the similarly themed Dancing With The Stars. That being said, Life & Style reports that the executives behind The Voice had plans to draw even more viewers in, and that they involved the relationship between two of the show’s judges: Gwen Stefani and Blake Shelton.

Life & Style claims that the NBC executives “really wanted an on-screen proposal from Shelton, in order to boost the show’s rating and conclude Stefani’s tenure on the show on a high note. Obviously, this did not happen. But why? And are the two heading for marriage? Here are five fast facts you need to know about Gwen Stefani and Blake Shelton’s cancelled proposal on The Voice.

1. Shelton Refused to Propose On Air

According to The Inquisitr, Shelton was uncomfortable with the idea of proposing on national television, and refused to go along with the plan that executives had laid out. As a result, the season 12 finale came and went without so much as a reference to marriage in the near future. The Inquisitr reports that Shelton declined to propose “not out of a desire to keep the actual proposal private or to arrange for a different, more romantic setting that blinding stage lights and a yelling crowd,” but because of the fact that the couple have allegedly been going through a rough patch in their relationship.

This attitude is certainly in opposition to the way Shelton felt about the idea of proposing earlier this year, as an episode in March saw fellow judge Alicia Keys casually ask “What about, like a proposal on the show?” Shelton ran with the idea, jokingly turing to Stefani and asking: “Would that make you feel weird, Gwen?” The No Doubt singer replied “That would be my dream come true!” Watch the clip above.

Stefani joined The Voice as a judge in 2015, where she initially met Shelton. Both were married at the time; Stefani to Bush frontman Gavin Rossdale and Shelton to fellow country singer Miranda Lambert. In the wake of their nearly simultaneous splits, however (July and August), the two judges wasted little getting intimate. By early November, a representative told ET that they had officially become an item: “Gwen and Blake are longtime friends who have very recently started dating.”

The couple quickly became the runaway story of The Voice, as evidenced by their flirtatious banter and the jokes that fellow judge Adam Levine would make about them. Stefani and Shelton even took to the stage to perform a duet, “Go Ahead And Break My Heart,” off of Shelton’s 2016 album If I’m Honest. The performance drew positive reactions from fans, who praised the chemistry between the two and the heartfelt singing. Watch the performance above.

3. ABC Wanted the Couple to Play Up Their Romance

Though their romance has been well-documented over the years, The Inquisitr reports that the producers of The Voice were pushing Stefani and Shelton to “act very affectionate and playful with each other” even when they didn’t feel like doing so. In fact, some have speculated that the strained relationship between them played a factor in Stefani’s decision to not come back for next season. This is a big blow to the show’s producers, who felt that the camaraderie between the singer and new judge Miley Cyrus was a huge factor in season twelve’s success.

As per The Inquisitr, Shelton has been aloof as of late when answering questions about Stefani’s return. When asked about the judges that would be returning, he was adamant about Keys, but when asked about whether or not Stefani would, he deferred to his fellow host to answer the question.

4. There Have Been Rumors of A Break-Up

Rumors of their strained relationship first began in April, when a source close to the couple said that they were calling it quits. “Gwen has already made the decision that it’s over,” explains the source, “Unsure they can even come to an agreement over big issues, like kids and where to live, Gwen decided to pull the plug on her relationship with Blake.”

These rumors have persisted in the wake of the cancelled proposal, as The Hollywood Gossip claims that the couple are “miserable” behind closed doors. “Gwen and Blake began to argue more,” claims an insider, “Then she started to realize they’re just too different to spend the rest of their lives together… Gwen wants the world to think everything is perfect with Blake. But that’s just not the case anymore.” Gossip Cop later released an article that denounced these rumors as “untrue” and “The No Doubt songstress has no intention of dumping Shelton in the near future.”

5. They Haven’t Addressed These Rumors

Despite these rumors, which seem to grow more frequent with each public appearance, Stefani and Shelton have kept their relationship under wraps from the public. As of now, it appears that they are as happy as ever together, whether they be taking Stefani’s children out for Easter or posting videos of themselves on Instagram. After the finale of The Voice, where Shelton’s team lost to that of Alicia Keys, Stefani posted a video where she joking asks him how he feels, to which he replies “a loser.”

Stefani takes the opportunity to cheer Shelton up, however, saying “I don’t think you’re a loser, I think you’re a winner still.” He flashes a big smile to the camera, and responds: “You do? I take it back, I think I’m a winner.” Watch the full video above. 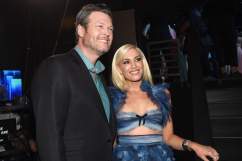 Read More
Blake Shelton, Gwen Stefani, The Voice
After rumors that Blake Shelton would propose to Gwen Stefani on the season finale of The Voice, it didn't happen. Learn more about the cancelled proposal and their current relationship status here.