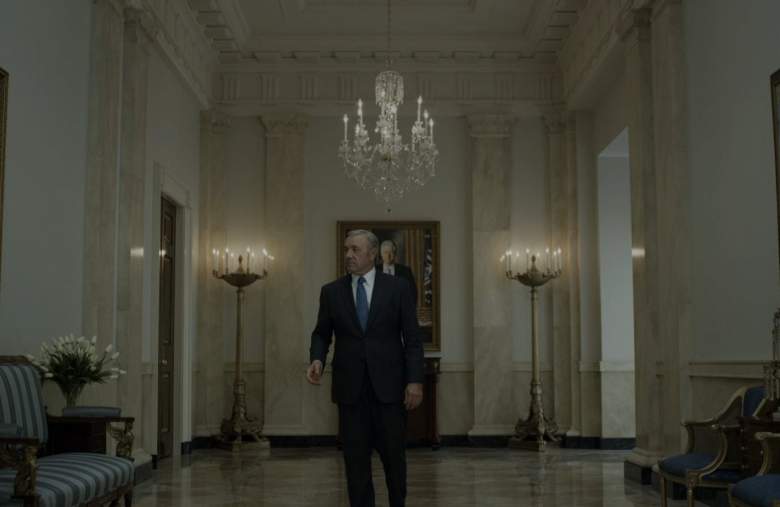 The presidential portrait of Bill Clinton is seen in an episode of ‘House of Cards.’ (Netflix)

House of Cards, the Netflix original series, follows a dramatized version of Washington, D.C. and a fictional presidential administration. Yet real presidents are frequently talked about on the show, so at what point does the House of Cards timeline diverge from our own? Which presidents exist within the show’s universe, and which don’t?

The most recent president that has been referenced on House of Cards is Bill Clinton, as Clinton’s presidential portrait is seen in Season 4 Episode 12. Pictures of Frank Underwood with Bill Clinton can also be seen throughout the series, and in addition, there is a scene in the first season of the show in which a character makes reference to Monica Lewinsky.

George H.W. Bush has also been mentioned on the show. In Season 2 Episode 3, Janine Skorsky is delivering a lecture talking about taking things out of context, and she uses a story about the 41st president as an example.

“1992. Fact: George Bush Sr. is shown asking how a grocery scanner works, and he gets nailed for it,” Skorsky says. “Fact: they were showing him a new model. He was asking how the new one was different from the old one. Curiosity, not ignorance. But the lack of context told a more powerful narrative.”

George W. Bush has not specifically been mentioned by name in House of Cards. However, certain events from the Bush administration, such as the Iraq war, have been talked about. For example, in Season 4, it is stated that Will Conway joined the military after September 11th, and Underwood says to Conway, “You want a career in politics and the Twin Towers fall in your lap? The timing couldn’t have been better.” The Iraq war has also been talked about.

Within the House of Cards narrative, then, Bill Clinton served in office from 1993 to 2001 just like in real life, and presumably everything before that is the same. From 2001 to 2009, someone – maybe George W. Bush or maybe a fictional analogue – served in office, and during this administration, 9/11 and the Iraq war took place. 2008 is where it gets interesting, as Barack Obama has never been mentioned in the series. Garret Walker is elected in 2012, but we don’t know who served from 2009 to 2013.

A popular theory is that Barack Obama does not exist in the House of Cards universe, and because of that, John Edwards was the Democratic nominee for president in 2008. He lost the election in part due to the scandal of his extramarital affair, and so John McCain won the presidency. However, McCain served only one term and was defeated by Garret Walker in the 2012 election. Another theory is that Barack Obama does in fact exist in the House of Cards universe, but for whatever reason, he did not run for a second term or he was defeated in the primary by Garret Walker. One piece of evidence to support this is the fact that it has been established that the Tea Party exists in House of Cards, and it’s unlikely that a conservative movement like this would have formed if a Republican was elected in 2008.

In 2014, Garret Walker resigned from office, making Frank the 46th president of the United States, and that brings us up to date.