Last week on Basketball Wives, Jackie threw a party, Cristen’s sister arrived and the other women were dealing with the aftermath of a Brandi ambush, according to VH1. BBWLA airs Mondays at 9 p.m. ET/PT on VH1, but, with today being Memorial Day, the show has taken a week off for the holiday. This means that episode 8, which is the next new episode, will not air until next Monday, June 5, 2017. And, the official synopsis for the next episode reads:

Jackie throws a “love your body” party; Malaysia feels that Shaunie, Tami and Evelyn snubbed her; Cristen divides her friendship with Jackie.

Tonight, instead of BBWLA, viewers will see a marathon of T.I. and Tiny: The Family Hustle episodes.

Previously on the show, Brandi Maxiell returned and confronted Tami Roman, Evelyn Lozada and executive producer Shaunie O’Neal in a restaurant. The ladies were not quick to speak with her, so she followed them, saying things like:

So no one here is going to say a word to me? No one? You feel threatened? Mm, someone wants [it] to seem like they have power.

Recently, former Basketball Wives star Laura Govan appeared on an episode of the show Iyanla Fix My Life and she opened up about the negatives that have affected her life since being on the show. Govan talked about when she was on the show, explaining that:

I was angry. [With] my life. With my ex. I was angry. I remember just being bitter. I remember I couldn’t wait to tell a story that I had sat in this house that was 15,000 square feet, with four babies, by myself. And I couldn’t … I couldn’t tell nobody. It was like I was drowning. I had everything and I had nothing.

Also on Iyanla Fix My Life, Govan says that she believes her younger sister, Gloria, slept with her ex, former NBA player Gilbert Arenas. Though Govan’s family doesn’t appear to believe that this happened, Govan insists:

We started dating and it was great, and then I introduced him to my family and in a short period of time it went south, real fast. I believe that he shared a relationship with my sister. 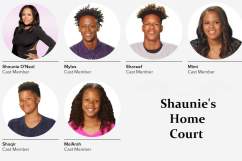