Julia Roberts will be teaming up with Bear Grylls tonight for a special Red Nose Day episode.

In honor of Red Nose Day, a global campaign to raise money for child poverty in the US and across the world, Roberts will embark on a mission to deliver life-saving vaccines to a remote village in Kenya. Her trek will entail crossing a river infested with crocodiles, jumping from a moving plane, and eating more than a few less-enticing meals.

In a promo for the episode, Roberts tells the cameras, “The river must be crossed in order to get our vaccines where they need to go. The first step was hard because you’re terrified and after that it’s no way out but through. It’s just about taking that deep breath.”

In a previous interview with People about her expedition with famed survivalist Bear Grylls, Roberts said, “I was so excited and encouraged by all the spirit that I saw and all the help that I realized could be done.”

As another special programming event in honor of Red Nose Day, NBC will also air an American Ninja Warrior special at 8pm ET. Celebrities like Derek Hough, Stephen Amell, Mena Suvari, and Erika Christensen will team up with expert ninjas to take a shot at the famed Ninja Warrior course. For every obstacle the celebrities complete, money will go towards Red Nose Day.

Read on to find out when and where to watch Julia Roberts on a special Red Nose Day episode of Running Wild with Bear Grylls. 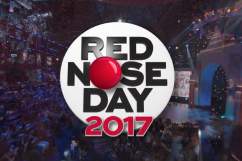