Madonna attends the Met Gala on May 1, 2017 in New York City. (Photo by Mike Coppola/Getty)

Madonna has never been one to hold her tongue when it comes to her opinion. The same can be said for her physical appearance, which, since she became a pop icon in the 1980s, has been the subject of countless media controversies. This continued on Saturday, May 6th, as the 58 year-old singer (born Madonna Louise Ciccone) posted a couple of revealing photos of herself on her Instagram account.

The first photo shows Madonna’s mouth and bare shoulders with various assortments of jewelry and necklaces. The Grammy-winning actress also looks to be sporting a gold-and-diamond grill, which seemed to correlate with the caption: “Gold.” Check them out below.

The second photo is even more revealing, as Madonna takes a snap of herself lying naked on her side, exposing most all of her backside and the lower part of her breasts. Fan reaction was wildly varied in the comment section, but most seemed to be supportive of her revealing images, with one viewer writing “You are the best!” Check out the second photo using the arrows above.

This isn’t the first time Madonna has posted controversial material on social media. In 2015, she launched an attack against Instagram over the constraints of showing nudity after it removed a nude photo of her. “Why is it ok to show a*s but not breasts? Drowning in the hypocrisy of social media,” she wrote in the caption of yet another scandalous photo, while adding the hashtags #artforfreedom and #rebelheart.

Why is it ok to show ass but not breasts? Drowning in the hypocrisy of social media #artforfreedom #UnapologeticbItch ❤️#rebelheart

As was mentioned, this is a fight that Madonna has participated in for many years. Her 1990 book Sex caused massive controversy upon release, as it featured photos of the singer performing a series of sexual acts with celebrities like Naomi Campbell, Isabella Rossellini, Udo Kier, Vanilla Ice and Big Daddy Kane. 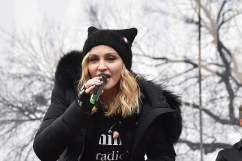 Will Madonna Face Arrest for Her “Blow up the White House” Comments?