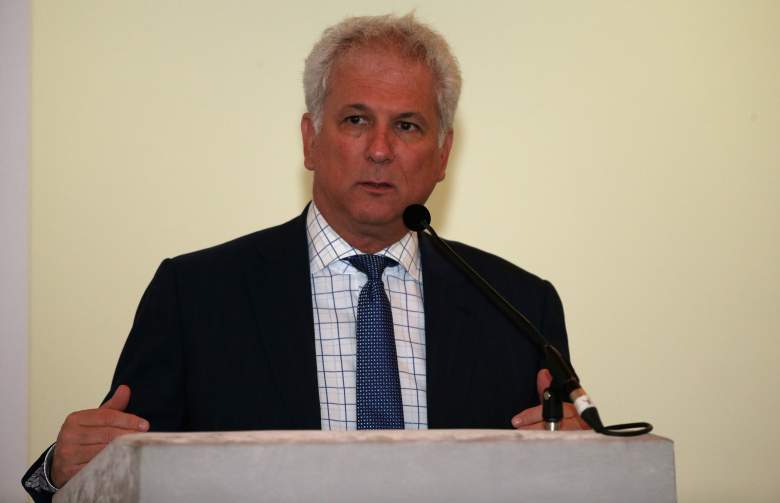 Nancy Kerrigan is a contestant on Dancing With the Stars and she has opened up about her family life, as well as personal battles. Kerrigan is paired up with pro dancer Artem Chigvintsev for the season and has struggled with her confidence in her dancing, though she continues to excel in the competition. With the support of her family and longtime husband Jerry Solomon, Kerrigan has shown her vulnerability, as well as determination in the ballroom. Solomon and Kerrigan married on September 9, 1995 and the couple is still together today. Read on for the details on their marriage, home life and struggles.

For years, Kerrigan and her husband struggled to have children and Kerrigan opened up about her fertility issues on Dancing With the Stars, saying that:

It was really hard. It almost felt shameful, I think, because I couldn’t do it on my own.

Kerrigan suffered six miscarriages on her journey to motherhood. When Kerrigan married Solomon, she was 25 years old and he was 41 and the two tried over and over again to start a family.

2. Jerry Solomon Was Kerrigan’s Agent When They Married

A year after Kerrigan retired from professional skating, she married her agent Jerry Solomon. Today, Solomon continues to be her manager, according to Earn the Necklace. Solomon is also the President and CEO of StarGames LLC, which is a sports marketing, management, and entertainment company. In addition to Kerrigan, he has managed many Olympic athletes over the years and has produced many events. Some of his wife’s projects that he has produced include Nancy Kerrigan & Friends and Nancy Kerrigan Golf Classic, Nancy Kerrigan’s World of Skating and Janet Evans Invitational.

In addition to production and management, Earn the Necklace reports that Solomon is also an Adjunct Professor at University of New Hampshire and the UCLA Anderson School of Management.

Solomon’s family is successful as well, with his father Edward Solomon being a chief executive of the retail chain Shoe-Town Inc.

3. In His Second Marriage, Solomon Was Accused Of Having An Affair With Kerrigan

Prior to getting together with Nancy Kerrigan, Solomon had been married twice. In fact, he even has a son named Clay from his second marriage to ex-wife Kathy. Earn The Necklace reports that Kathy Solomon was once a tournament manager in Solomon’s former company ProServ. She reportedly didn’t travel much with her husband and, according to People, she alleged that Solomon had an affair during their marriage, which led to speculation that Kerrigan was his mistress. Solomon did admit that he and Kerrigan had a “personal relationship,” but he maintained that:

My situation with Nancy is completely separate from my situation with Kathy … Kathy was as supportive as she could be. She had to put up with a lot of situations related to this business. The issues between us are personal.

Is Nancy seeing Jerry? Yes. Was she seeing Jerry while he was still with his wife? Absolutely not. She would not ruin someone’s family.

Still, a source at the time, told People:

At the Olympics, everybody thought something was going on—[Kerrigan and Solomon] were inseparable. They were spotted all over town having dinner, and they weren’t being subtle about it.

4. Solomon and Kerrigan Have Three Children Together

Kerrigan and Solomon have three children together – Matthew, Brian and Nicole Solomon. In an interview with Parade, Kerrigan said her kids Nicole and Brian are big in gymnastics and Brian even competes in the sport. Nicole also takes ballet, tap and jazz classes. Kerrigan tells Parade that Brian actually hopes to compete in the Olympics as she reveals:

He does have Olympic aspirations, but they’re so young, they don’t have any idea how difficult it really is. I think the older he gets and the harder it all gets, he’s realizing you have to work super hard.

In the 1990’s, Kerrigan suffered an infamous attack against her, with a hitman attacking her leg in hopes of injuring her, which it did. The attack was reportedly orchestrated in connection to fellow skating competitor Tonya Harding. Decades after the attack, the incident seems to be one of the biggest things that Kerrigan is known for and her husband Solomon is not happy about it. Solomon explained that:

There is a lingering frustration for us both about the whole episode. Nancy is an athlete who went to two Olympics and earned two medals, a very rare accomplishment in skating. Instead of being remembered for that, she is remembered for this bizarre incident.

Soon, Margot Robbie is going to appear as Tonya Harding in a biopic about the incident, as reported by E! News. The biopic is titled I, Tonya.