#BBMAs: @NICKIMINAJ kicks off the show with a medley of top hits pic.twitter.com/u1S0RwsFXO

Starting off the performance, little girls, male backup dancers, booty-rific girls and an acrobats all participated in a huge dance routine to a medley of music by Minaj. 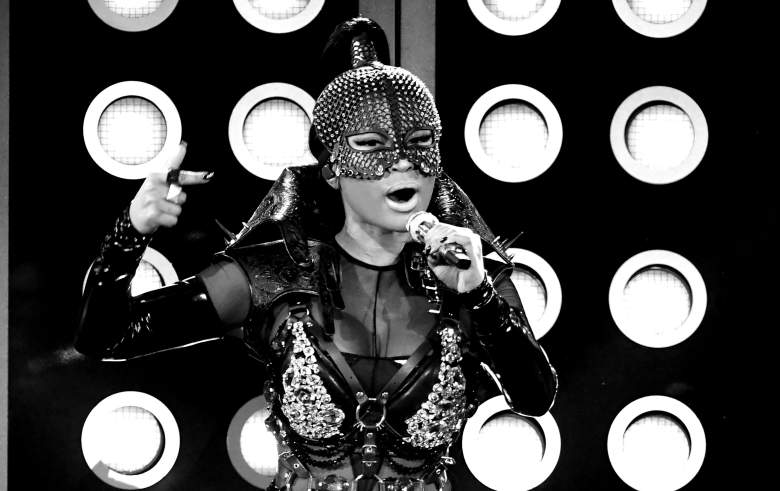 Soon, Minaj was revealed from behind a monster screen, showing off an S&M-themed set, with a fierce head-to-toe look. Minaj then carried out a sexy performance of her song “No Frauds.” Halfway through the song, Lil Wayne showed up on stage, wearing camo sweats and fur. During his set, Minaj disappeared from the stage.

With a small change to her look, Minaj reappeared in another area of the stage, with David Guetta spinning in the background. Following some booty dancing and sexy dance moves from Minaj, Jason Derulo made his way to the stage to deliver a performance of their song “Swalla.”

Lastly, Minaj lip-synched to her song “Regret In Your Tears.” Though she had to lip-synch tonight, she still was able to execute an awe-worthy performance.

NO WORDS. Just…wow. That is how you do the #BBMAs, @NICKIMINAJ. #MinajMedley pic.twitter.com/kZ0SzvIRpI

After Minaj’s performance, show hosts Vanessa Hudgens and Ludacris gushed over the set and Hudgens stated that Minaj is her spirit rapper. Hudgens said that she pretty much idolizes Minaj, which made Ludacris challenge Hudgens to a rap session. Taking him up on his request, Hudgens delivered a little rap, which you can check out in the below tweet.

Give it up for your #BBMAs hosts, @LUDACRIS and @VanessaHudgens! ? pic.twitter.com/1YTAteZQBS