The final season of Pretty Little Liars is fully underway and some of the people who have been helping out the ultimate, mysterious villain A.D. have been revealed. Jenna Marshall clearly was involved and now we know that Sydney Driscoll is one of A.D.’s little helpers as well.

On the previous episode, Aria came face to face with Sydney, who explained that it’s better to be on the winning team, urging Aria to betray her friends and join A.D.’s side. When the Liars’ game skips Aria, forcing Hanna to take another turn, Aria is again, approached to move over to the dark side.

In an interview with TV Line, actress Lucy Hale, who plays Aria, dished on her character’s betrayal, saying:

It was fun to play a totally different side of her. You’ve really never seen this kind of behavior from her before … A lot of people are going to be angry with Aria … I’m reading a lot of tweets from people who are not happy with me,

Despite Aria’s new side, this isn’t the first time that a Liar has gone against the others. We’ll have to wait and see if Aria decides to continue down a dark path or not.

So, who is the person pulling the strings as A.D.? There are so many theories going around … Could it be one of our favorite PLL characters who we have been watching since the beginning of the series? Is it someone we’ve never even met?

What may be really disturbing to fans this season is speculation that two beloved characters – Mona and Caleb – may die by the end of the series. According to Refinery 29:

Pretty Little Liars fan account @ARavenswoodRosewoodLiar posted a still from one of Freeform’s promotional clips. This one appears to be for an upcoming special — the show’s hour-long “post-mortem” that TVLine reported we would see immediately after the PLL finale on June 27. The still, which reads “Dead Liars Tell All” seemingly reveals which characters will perish before the finale. Daugherty’s Noel seems to be in the shot, and while the other characters are a little fuzzy, fans are convinced that it’s Tyler Blackburn, who plays Caleb, and Janel Parrish, who plays Mona, on the left, which means … Pretty Little Liars might actually kill off two of the show’s best characters.

On the other hand, in the past, we thought that Mona was dead on the show, so maybe that’s why she’s included.

Check out the photo that was posted on Instagram below and judge for yourself.

How cool is this? I can't wait to hear some answers!!! This was a promo shown on Freeform yesterday during the Monsters Inc movie:) #DeadLiarsTellAll #pllendgame #pll #prettylittleliars #pllseason7 Video courtesy of Pretty Dirty Secrets Español on YouTube https://youtu.be/rdYGIq_qBlo

On tonight’s episode of PLL, the show is titled “In the Eye Abides the Heart” and the plot description reads:

A.D. blackmails one of the Liars into supplying information to the dark side to protect those closest to her; Hanna sets out to prove Lucas’ innocence; one more person gets brought in on the secret of A.D.’s game.

The following episode is titled “The Glove That Rocks the Cradle” and the show synopsis states:

The Liars close ranks to protect one of their own as Detective Furey closes in on uncovering what happened to Archer Dunhill; Hanna struggles with the idea that Lucas might be connected to A.D. even in the face of additional evidence. 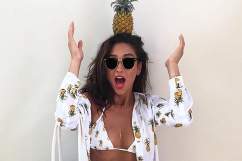