Sienna Miller attends the premiere of ‘The Lost City Of Z’ on April 5, 2017 in Hollywood, California. (Photo by Rich Fury/Getty)

Sienna Miller looks to be the latest celebrity figure to have intimate pictures stolen by hackers and posted online. According to The Sun, the photos are said to have been released by hackers who hacked the password of the actress’ cloud storage account and/or the messaging services of her and her friends.

A source close to Miller claims that she “will be devastated these pictures said to be of her fooling around have been put online by some weirdo. They sometimes post them online to show off and once they’re online, it’s hard to make them disappear again.” The photos in question involve Miller, 35, being topless and wearing a mask over her face.

This is only the latest of the nude photo leaks that have collectively been referred to as “The Fappening 2.0,” in connection to the website which promotes them. Among the women who have been exposed to this ordeal include Emma Watson, Amanda Seyfried, Demi Lovato, Katie Cassidy, and several WWE wrestlers like Alexa Bliss and Charlotte Flair.

As for Miller, the Golden Globe nominated actress is no stranger to the tabloids. Prior to her breakthrough in the 2004 films Layer Cake and Alfie, she was a model who posed semi-nude for a Pirelli Calendar photoshoot. An accompanying video showing her dancing topless on a tabletop and kissing another model can be still be found online. Once she was became a respected actress, however, Miller became much more protective of her privacy.

According to Vogue, she sued two British tabloids in 2008 for posting topless photos of her while she was with former boyfriend Balthazar Getty on a yacht. Later that year, she became the first person to sue a British paparazzi agency and win, thus “making it illegal for photographers to snap her at home or anywhere else she can expect privacy.”

Recently, Miller was romantically linked to actor Brad Pitt. Page Six reported that the two were spotted doing some “serious flirting” while out to dinner with friends in Los Angeles, and they they were “heavily enjoying each other’s company.” Miller subsequently shut these rumors down during the promotion of her 2016 film The Lost City of Z, saying “I’m not going to even dignify it with a response. It’s predictable and silly.”

Miller has dated a number of industry figures over the years, including filmmaker Bennett Miller and actors like Getty, Jude Law, and Tom Sturridge— the latter with whom she has a daughter, Marlowe Ottoline Layng Sturridge.

She has yet to release a statement regarding the leaked photos. 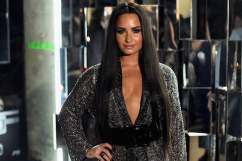