Taye Diggs is causing quite a stir on the internet with a revealing, bewildering photo on his Instagram timeline. Diggs, who rose to prominence as an actor in films like How Stella Got Her Groove Back (1998), The Best Man (1999), and The Best Man Holiday (2013), as well as the Broadway musicals Rent and Hedwig and the Angry Inch, posted a photo of himself on Friday, May 26th, that shows his bare backside in a mirror reflection.

Additionally, the actor has his shirt tied in a knot at the waist, and his face can clearly be seen in the photo. The image was initially posted on Diggs’ timeline, but shocked fans quickly snapped screenshots of it, and within hours, it went viral and became a trending topic on Twitter.

Check out the racy photo of Diggs below:

As to be expected, fans jumped onto the photo, and Diggs, expressing bewilderment and plain confusion as to why such a revealing photo was posted on a social platform. Check out some of the best reactions below, which range from shock and awe to a prime opportunity to poke fun at Diggs’ acting career:

When you finally see why Taye Diggs trending: pic.twitter.com/fTriLBpZUi

When I see taye diggs is trending then decided to find out why pic.twitter.com/fU8AekSb8d

Taye diggs with the winnie the poo sext

I thought Taye Diggs was trending bc he's finally dating a Black woman.

me: why is Taye Diggs trending?
friend: girl, idk.. check.
me: *sees why*
friend: did you find out why?
me: girl, let's not speak on that… pic.twitter.com/BuXksThI7m

Taye Diggs: Lemme explain, it's was for a new role…
Cookie: pic.twitter.com/bF0KHMNI23

This is not the first time Diggs has been the center of controversy. In 2015 was the recipient of backlash when he revealed that he wants his son Walker to be considered “mixed and not “black.” He explained his divisive statement, saying:

“I think when you [call biracial people black], you risk disrespecting half of who you are. I don’t want my son to be in a situation where he calls himself black and everybody thinks he has a black mom and a black dad, and then when they see he has a white mother, they’re like, “What’s going on? Are you ashamed?’”

Diggs later clarified his comments on Instagram, writing: “I am a proud black man, I want my son to grow up to be a proud black man if he so chooses. He has a mother who is white. He has every right to be just as proud of his mother’s ‘blood’ as well. Please wake up, people. It’s not that deep.”

The Instagram photo also caused many to question Diggs’ sexual orientation, a topic that has long been a subject of debate and speculation. Despite fathering a child with ex-wife and Frozen actress Idina Menzel, Diggs has historically been elusive when it comes to his sexuality, telling The Inquisitr in 2015 that he “experimented” when he was younger:

“There’s a lot of glitter. I mean, I went through a stage where I was a drag queen in high school in tenth and eleventh grade, and I experimented with homosexuality, a– play. And outside of that I worked the streets, male prostitution.”

Diggs added that “I have a flaming homosexual inside of me, so I’m rearing to let that out.” Menzel told Pride Source a different story when they were still married, as the question of his homosexuality was met with a concise “No. Please.” Menzel further stated that “he went to the high school of the arts in Rochester and majored in theater in Syracuse, and so many of his friends were gay before we event met.” 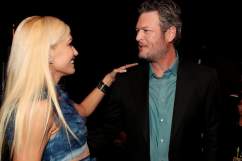