Stephen King‘s The Dark Tower is finally reaching theaters this year, and Sony Pictures has released the first trailer for the fantasy science-fiction Western. The film hits theaters on August 7, 2017 in 3D And 2D.

Directed by Nikolaj Arcel (A Royal Affiar), the film tells the story of Jake Chambers (Tom Taylor) who discovers the Mid-World dimension. There, he meets the Gunslinger Roland Deschain (Idris Elba), who is trying to find the Dark Tower in End-World. The two have “The Man in Black,” Water Padick (Matthew McConaughey), on their trail, so the journey will not be easy. But they have to reach their destination if they hope to save all of existence – including our world – from destruction.

Considering there is only so much material that can be packed into a single film, McConaughey told Fandango that it adapts several of the books from King’s long Dark Tower series into one movie.

“This film is an amalgamation of quite a few different books,” McConaughey told Fandango. “If you know the books you’ll recognize where we put different things together. This is the first chapter in a series of stories that if people show up, we have a lot more to tell.”

King’s original Dark Tower series includes eight novels, published between 1982 and 2012. It began with The Gunslinger in 1982. King published the most recent book, The Wing Through The Keyhole, in 2012. The series was also adapted into a comic book series published by Marvel.

The film has been in the works for over a decade, starting with J.J. Abrams attached in 2007. But nothing came of that and in 2010, Ron Howard entered the picture. Although Howard is no longer directing, his Imagine Entertainment is still involved. Arcel was hired in 2015 after the project moved to Sony, with Media Rights Capital producing.

Back in September 2016, Entertainment Weekly confirmed that The Dark Tower IV: Wizard And Glass will be adapted into a TV series. Although the project centers on a younger Roland, Elba is expected to appear. McConaughey also told Fandango that he’s “somewhat involved” in the series.

The film was written by Arcel, with Akiva Goldsman, Jeff Pinker and Anders Thomas Jensen. Junkie XL, who worked on the Batman v. Superman: Dawn of Justice score with Hans Zimmer, wrote the score for The Dark Tower.

The Cast of ‘The Dark Tower’ 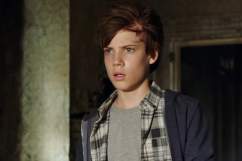