The season 12 finale of The Voice is tonight and we’ve got the rundown on all the major music artists who are performing on the show. Some will be teaming up with the remaining four finalists, while others will be singing some of their latest hit singles.

The remaining four contestants this season are Jesse Larson from Adam Levine’s team, Lauren Duski and Aliyah Moulden from Team Blake Shelton, and Chris Blue from Alicia Keys’ team. For the big finale performances, Larson will have the opportunity to perform the song “Shining Star” with former judge and superstar CeeLo Green. Country group Little Big Town will perform the song “Better Man” with contestant Lauren Duski. Another former Voice coach who is set to perform is Usher, who will take the stage with finalist Chris Blue.

Show cast-off Mark Isaiah will return for a collaboration with artists Luis Fonsi and Daddy Yankee on their song “Despacito.” Other cast-offs who will get to perform with big stars include TSoul, Vanessa Ferguson, Hunter Plake and Brennley Brown. Ferguson and TSoul will team up with Gladys Knight, who will perform “You’re the Best Thing That Ever Happened to Me” and “If I Were Your Woman”. As for Brown, she will sing “Yours If You Want It” with country band Rascal Flatts and current Voice coach Gwen Stefani will perform the No Doubt classic hit song “Don’t Speak” with her former team member Hunter Plake. Stefani doesn’t have any contestants from her team left as finalists on the show.

Additional performers tonight include Chris Stapleton, Zedd, Miley Cyrus, Jennifer Hudson and Alessia Cara. Hudson and Miley Cyrus are both coaches for the upcoming season 13 and will each be performing their latest singles. Cyrus will sing “Malibu<" while Judson will perform her new song "Remember Me." Chris Stapleton will be performing a ballad of his, titled “Either Way” tonight. 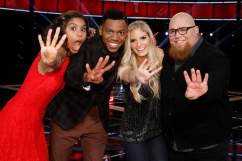 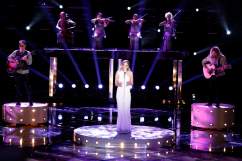 Lauren Duski on ‘The Voice’: Will She Win Season 12?

Read More
Adam Levine, Gwen Stefani, Reality TV, The Voice, TV
The Voice 2017 is wrapping up and tonight is the season 12 finale. Get the rundown on who the celebrity performers are, along with performance details.