After premiering on HBO last month, 4 Your Eyez Only is now available to watch for free on YouTube.

The documentary, while tied to the release of J. Cole‘s latest album, focuses less on the music and more on the emcee as a voice in society. The doc sheds light on the topics that Cole often tries to shine a light on in his music– being poor, struggling to thrive, and in one particularly harrowing account, the effects of racial profiling. 4 Your Eyez Only includes video footage of a SWAT raid on Cole’s home, where it’s reported that he was accused of dealing drugs by his neighbors. The incident would go on to inspire the song “Neighbors” on Cole’s LP.

In an interview with the New York Times, Cole discussed the impact of the documentary, saying “I felt like it would be mad powerful for black people to see Black people talking to each other. And you see a rapper who’s considered one of the biggest in the game, just listening. These are people that never get to be heard, by the world or even by each other.” Cole also previews music that was left off of his latest LP. Check out the full 48-minute documentary below.

This isn’t the first time Cole has released a documentary in conjunction with an album. In 2015, he partnered with HBO to create Road to Homecoming, which covered a concert in his hometown of Fayetteville, North Carolina. The documentary was paired with Cole’s third LP 2014 Forest Hills Drive, which achieved the rare feat of going platinum with no guest features. You can watch part one of the six part series here. 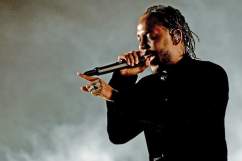