Selena Gomez and Justin Bieber at the 2011 American Music Awards on November 20, 2011 in Los Angeles, California. (Photo by Jason Merritt/Getty)

It looks like Selena Gomez plans to take shots at her famous ex-boyfriend Justin Bieber on her upcoming single.

The “Hands to Myself” singer has teamed up with Charli XCX to write a song called “Bad Girlfriend,” which reportedly features lyrics about a woman taking the blame for her relationship problems– despite her partner’s immature behavior. Sound familiar? Needless to say, many are drawing comparisons between the song’s alleged theme and Gomez’s tumultuous relationship with Bieber.

A source told The Sun that “It’s all about a boyfriend that girl is no longer really into and has finally gotten wise to. It’s tongue-in-cheek and Selena and Charli knew exactly who they were writing about. She sings about how a good girlfriend would carry on and just let their boyfriend walk all over them, with their cheating and whatnot, but she’s changed her ways.” The source added that “It will undoubtedly be tweaked but they were really with how the songwriting session went and were loving slating their exes.”One particular lyric that is said to be in the song says: “I know I’m not there for you or there when you call. I’m a bad girlfriend / I’m a bad girlfriend.”

If true, this wouldn’t be the first time Gomez has publicly accused Bieber of cheating. In 2015, the singer posted a comment on his Instagram account, writing “Funny how the ones that cheated multiple times, are pointing the finger at the ones that were forgiving and supportive, no wonder fans are mad. Sad. All Love.” Gomez followed up her comment by saying: “If you can’t handle the hate then stop posting pictures of your girlfriends lol– it should be special between you two only.

Gomez is currently dating R&B singer The Weeknd, while Bieber has been romantically linked to another ex-girlfriend, Chantel Jeffries. 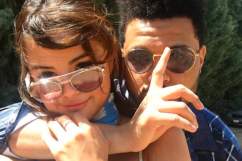