Zack Snyder has been the creative force behind the DC Extended Universe since its inception in 2013. Along with screenwriter David S. Goyer, Snyder has helmed the critically divisive, commercially successful superhero films Man of Steel (2013) and Batman v Superman: Dawn of Justice (2016).

While he was finishing up Justice League, his daughter, Autumn, committed suicide, according to The Hollywood Reporter. Following the news, Snyder decided to step down, leaving directorial duties to Joss Whedon.

Though details surrounding Autumn’s death have been kept under wraps, The Hollywood Reporter reveals that she passed away on March 20, 2017. She was attending Sarah Lawrence College, and was working on science fiction novel that she was hoping to publish. Snyder took a two-week break from shooting Justice League to grieve after her death, along with his wife Deborah, who’s produced the majority of his films to date, including Watchmen (2009) and Sucker Punch (2011).

Snyder spoke to The Hollywood Reporter about the challenges of continuing his work.

“In my mind, I thought it was a cathartic thing to go back to work, to just bury myself and see if that was way through it. The demands of this job are pretty intense. It is all consuming. And in the last two months I’ve come to the realization …I’ve decided to take a step back from the movie to be with my family, be with my kids, who really need me. They are all having a hard time. I’m having a hard time… I want the movie to be amazing and I’m a fan, but that all pales pretty quickly in comparison. I know the fans are going to be worried about the movie, but there are seven other kids that need me. In the end, it’s just a movie. It’s a great movie. But it’s just a movie.”

2. She Created the ‘Write-A-Thon’ Charity

So proud of my amazing daughter Autumn's first philanthropic endeavor! Looking for an great cause to support? http://t.co/1Ayy8pNFwz

Autumn loved to write and help others — the most notable combination of these being the Write-A-Thon To End Homelessness For Mothers and Their Children charity. She created the charity in 2014, after her father had released the commercial blockbuster Man of Steel (2013), as she wanted to provide shelter for children that were less fortunate than her. On her Crowd Rise page, Autumn penned a mission statement:

“The Elizabeth House, also known as Family Hope, is a nonprofit that shelters homeless pregnant women and their children. California has 2,200,000 children living in poverty and almost 300,000 of those children experience homelessness each year. Every word I write during this two week write-a-thon will be dedicated to helping children secure a safe home to grow up in.”

“The Elizabeth House helps to take care of children and mothers who are in need by providing physical, emotional, and financial support in a nurturing environment. Every child deserves more than living on the streets, which is why I am doing a two-week fiction write-a- thon to raise money for this important cause.”

Her father was clearly proud of her, evident by the tweet above. In his interview with The Hollywood Reporter, Snyder recalled a quote from author Chuck Palahniuk that Autumn was particularly fond of: “We all die. The goal isn’t to live forever, the goal is to create something that will.” Snyder added that “maybe this helps” in some way.

3. Zach Snyder Has 7 Other Children

Autumn was actually one of eight children that Snyder has helped raise while pursuing his filmmaking career. According to a 2013 cover story by Bloomberg, he had two children with a woman he didn’t marry, and four children, including Autumn, with his ex-wife, Denise Snyder. Upon marrying Deborah in 2004, they adopted two more children.

These children were in part responsible for Legends of the Guardians: The Owls of Ga’Hoole (2010), the animated film that has the distinction of being Snyder’s only family release. In an interview with Chicago Parent, he explained that his son Eli’s love for The Owls of Ga’Hoole book series inspired him.

“Being a dad is a huge part of [directing a kids’ movie]. I showed them bits of the movie to see ‘is this too scary? Is this cool?'”

Snyder has the names of all eight of his children tattooed on his arms.

Many have been vocal in their support of Snyder and his family, including Wonder Woman director Patty Jenkins, DC creative consultant Geoff Johns, and Guardians of the Galaxy director James Gunn:

Our hearts are with the Snyder's and have been. Truly good people and friends to so many. xoxo https://t.co/Q3cLX9ihlu

I may have harsh opinions on his films, but my thoughts and prayers are with Zack Snyder and his family on their loss.

My heart, eternal support & thanks to my friend & colleague @zacksnyder – one of the kindest and most inspirational artists I've ever known.

@ZackSnyder Sir take all the time you & your family need. Family is always first. I am so so sorry for your loss. Movies pale in comparison.

My thoughts and prayers are with @ZackSnyder and his family. Much love to all of them.

Autumn had no intentions of becoming an actor, but that didn’t stop Snyder from dropping her into a brief cameo in his Superman reboot, Man of Steel. That being said, it isn’t the type of cameo that you’d expect or even be able to spot without careful attention to detail.

According to Reck News, Snyder brought Autumn onto the set the day that they shot the fight between Superman (Henry Cavill) and the minions of General Zod (Michael Shannon) in Smallville. He placed Autumn on his shoulders during a recording session, and if you listen closely, you can hear her say “uh-oh” just before the drums in Hans Zimmer’s musical score kick in. Snyder has never elaborated on whether this was accidental or simply a dad incorporating his family into the film. Give it a listen above.

5. Snyder Stepped Down as Director for ‘Justice League’ After Her Death

Fuck. Sorry to hear the horrible news of his daughter's passing. As much as I want him to finish up his movie, I rather him and his family slow down and mourn their terrible loss. I'm so sorry to hear this news. :-( #justiceleague #zacksnyder #batman #batmanvsupermandawnofjustice #dawnofjustice #batmanvssuperman #aquaman #superman #rip #restinpeace #joker #jokerandharley #harleyquinn #thejoker

A post shared by BloodyCreaturePosterGirl (@batgirl.aka.batbrain) on May 22, 2017 at 3:47pm PDT

DC and Warner Bros. are in full support of Snyder’s decision to step away from working on Justice League.

“What they are going through is unimaginable, and my heart — our hearts — go out to them,” says Warner Bros. Pictures president Toby Emmerich.

Initially, there were plans to push back the release date of Justice League (November 17), but Snyder was against the idea and wanted to keep the release date that had been promoted since early 2016. He subsequently contacted Joss Whedon — who helmed The Avengers and its 2015 sequel, Age of Ultron — to write additional scenes and step in as director.

“The directing is minimal and it has to adhere to the style and tone and the template that Zack set. We’re not introducing any new characters. It’s the same characters in some new scenes. He’s handing a baton to Joss but the course has really been set by Zack. I still believe that despite this tragedy, we’ll still end up with a great movie,” Emmerich told The Hollywood Reporter. 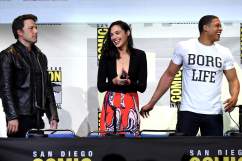