Anita Pallenberg has died. An actress and muse for the legendary rock band The Rolling Stones, Pallenberg’s death was made public on June 13th by Stella Schnabel, the daughter of painter Julian Schnabel.

“I have never met a woman quite like you Anita,” Stella wrote on her Instagram. “I don’t think there is anybody in this universe like you. No one has ever understood me so well. You showed about life and myself and how to grow and become and exist with it all. I was a little girl thinking I was big but I became a woman through knowing you.”

Pallenberg was 73. A cause of death has yet to be determined. And though she was never married, Pallenberg is survived by her two living children, both of which she had with Rolling Stones guitarist Keith Richards.

To learn more about Pallenberg’s surviving family members, and her relationship with Richards, here are five fast facts you need to know.

1. Marlon Richards Is Their Eldest Child

The couple’s first child, Marlon, was born under extremely hectic conditions. Pallenberg announced that she was pregnant a mere eleven days after her former lover, and Rolling Stones founder Brian Jones, was found dead in a swimming pool.

As a result, Marlon grew up into the turmoil of his parents lifestyle, which, at the time, including an increasing dependency on heroin. According to the Daily Mirror, Richards took Marlon away from his addicted mother for a brief time, and brought him on tour with The Rolling Stones.

Marlon was later reunited with Pallenberg, only to see her boyfriend at time, Scott Cantrell, shoot himself in their New York City home. He was 9 years-old. Despite this seeming recipe for disaster, however, Marlon has proven to be quite the opposite of his rockstar parents.

Daily Mail reported in 2010 that Marlon went on to lead a relatively quiet family life with his wife Lucie Richards and their daughter Ella Rose, who followed in Pallenberg’s footsteps to become a model. He currently resides in a farmhouse in West Wittering, where he works as a graphic artist and photographer.

2. Their Youngest Child, Tara, Died As A Baby

Their second child, Tara Jo Jo, was born on March 26th, 1976 and lived for only ten weeks before dying in his crib. The cause of death was Sudden Infant Death Syndrome (SIDS), which is defined as an apparent spontaneous cessation of breathing.

In his 2011 autobiography Life, Richards opens up about the trauma that losing a child took on him. “Leaving a newborn infant son is something I can’t forgive myself for,” he writes, referring to the fact that he went on tour with The Rolling Stones shortly after Tara’s birth in 1976.

The book’s co-author, James Fox, gave his own take on the tragedy, telling Daily Express “The first time we talked about that, Keith couldn’t get out more than five words. Then we realized we had to go back to it. He told me he thought about it every week.”

3. Angela Richards is Their Middle Child

Angela Richards and Keith during her wedding in 1998. (Pinterest)

Angela nearly matched her older brother in terms of dramatic entrances. As reported by Daily Mail, Pallenberg was using heroin up to three times a day at the time, and requested that Richards arrange for an abortion. Conversely, Richards believed that the baby was not fathered by himself, but actually by his Rolling Stones bandmate, Mick Jagger.

This rumor stemmed from the 1970 film Performance, which co-starred Pallenberg and Jagger, and reportedly led to them having an affair onset. The rumors surrounding the film persist to this day, but Pallenberg made it very clear, especially in an interview with The Guardian in 2008, that it was not true. The tension between Richards and Jagger eventually dissipated, and Angela was born in Switzerland in 1972.

Angela, whose nickname is “Dandelion,” spent much of her childhood under the care of Richards’ mother Doris. When Doris died in 2007, Angela moved to a large estate owned by her father, where she currently lives with her husband Dominic Jennings and runs a horse riding school.

She and Richards meet up regularly whenever the aging rocker comes to Britain.

4. Pallenberg Was the One Who Looked Over the Children on the Road

In a 2016 interview with Alain Elkann, Pallenberg discussed what it was like raising children in such a fast-living environment:

We were on the road a lot, traveling on tour, and I took my son everywhere. I did not send Marlon to school until he was 8 years old. I taught him how to read and write while Keith’s mother looked after my daughter. The difficulty with Keith is that he sleeps all day, and ideally, I had to be up with the children all day. I couldn’t have made the tours without the protection of drugs.

Pallenberg claims that Richards’ lawyers were to blame for their eventual breakup in 1979, as they deemed her to be a bad influence on his career.  Still, they maintained the utmost respect for one another over the years, and Pallenberg later spoke highly of their fifteen year relationship:

He was the biological right man to be the father of my children. It was more respect and friendships than mad love. Keith is very generous. In those days we did not plan families. I certainly did not want to get married, but I got pregnant.

On June 14th, Richards paid tribute to his former girlfriend on his Twitter account. “A most remarkable woman,” he wrote, “Always in my heart.”

A most remarkable woman. Always in my heart.
(Photo: Michael Cooper) pic.twitter.com/ubZtRYW1Am

5. They Have 2 Half-Siblings, Theodora & Alexandra

Marlon and Angela have two younger half-siblings on their father’s side: Theodora and Alexandra. Both are the children of Richards and Patti Hansen, an American model whom he married in 1983. Theodora, born 1985, is a model who made her appearance in print at the age of 16, and has since gone on to become the muse for the New York City denim collection, 4Stroke Jeans.

She also honored Pallenberg on Tuesday by posting a photo of her on Instagram account. “What a woman” she wrote.

In 2015, Theodora entered a rehab clinic in New York City. She spent 30 days there for drug abuse issues, but according to NY Daily News, she was came out “seeming really happy and big spirits.”

Alexandra, born 1986, is a model similar to her sister, and has appeared in magazines such as Vogue, British Glamour, Harpers Bazaar, and Teen Vogue. She also performs as a DJ and an artist. 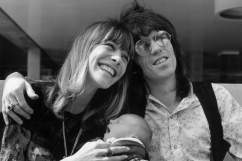