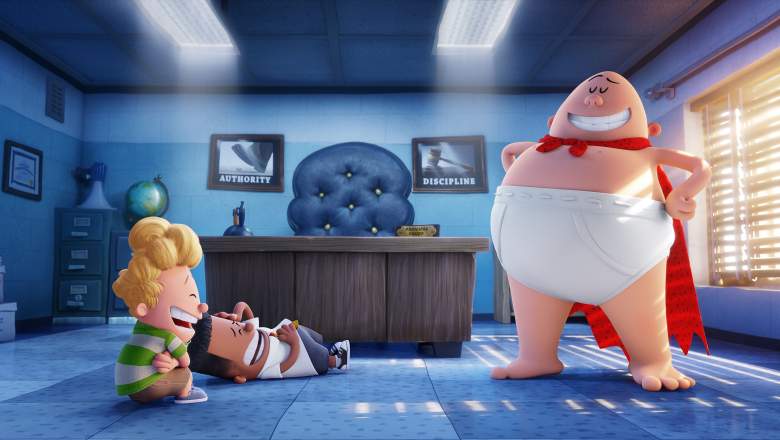 It’s been a long time coming, but Dav Pilkey’s Captain Underpants is finally on the big screen! DreamWorks Animation’s Captain Underpants: The First Epic Movie is now in theaters and has been earning great reviews. It features a star-studded voice cast headlined by Kevin Hart and Ed Helms. Read on to meet the rest of the cast.

The First Epic Movie was directed by David Soren (Madagascar) and written by Nicholas Stoller (The Muppets, Storks). It’s about George Beard (Hart) and Harold Hutchins (Thomas Middleditch), who hypnotize their principal, Mr. Krupp (Helms) into thinking that he’s a superhero called Captain Underpants. George and Harold created the character in comic books they wrote.

The new movie runs 89 minutes long and is the last DreamWorks Animation movie released by 20th Century Fox. The studio is now owned by Universal Pictures, which will release all of its future movies. The film has earned surprising acclaim, notching an 81 percent fresh rating on Rotten Tomatoes.

Now, it’s time to meet the actors behind the voices in Captain Underpants: The First Epic Movie. 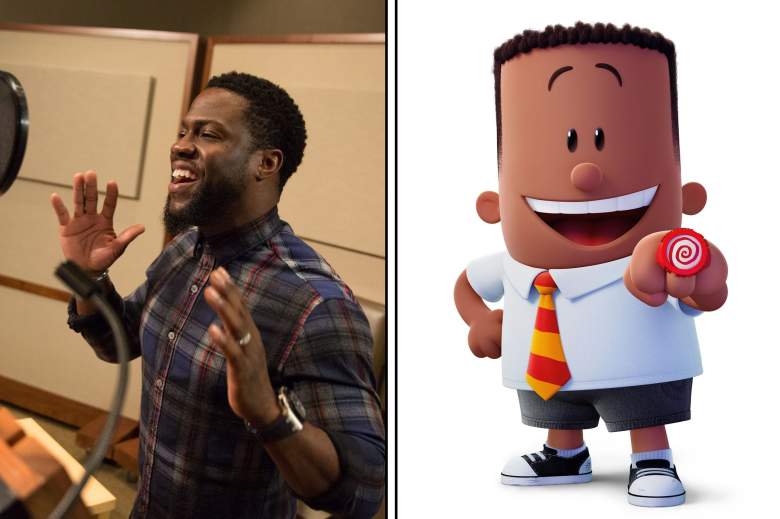 Kevin Hart, easily the most popular comedian in the world right now, voices George Beard, one of the two kids who convinces their principal that he’s a silly superhero. Hart is also the hardest-working man in show business today, but he still finds time to contribute to animated movies. He voiced Snowball in last year’s The Secret Life of Pets. Later this year, he will be seen in Jumanji. Next year, he’ll be seen in Untouchable and Night School. Last year, he was in four movies! Phew. 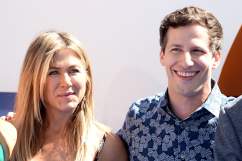 Ed Helms voices Mr. Krupp, the principal the two boys hypnotize into becoming Captain Underpants. Helms is best known for starring in The Hangover movies, as well as playing Andy Bernard on The Office. He got his start as a Daily Show correspondent. He voiced The Once-ler in 2012’s The Lorax and a news reporter in 2009’s Monsters vs. Aliens. Last year, he appeared in Kevin Hart’s stand-up movie Kevin Hart: What Now?. 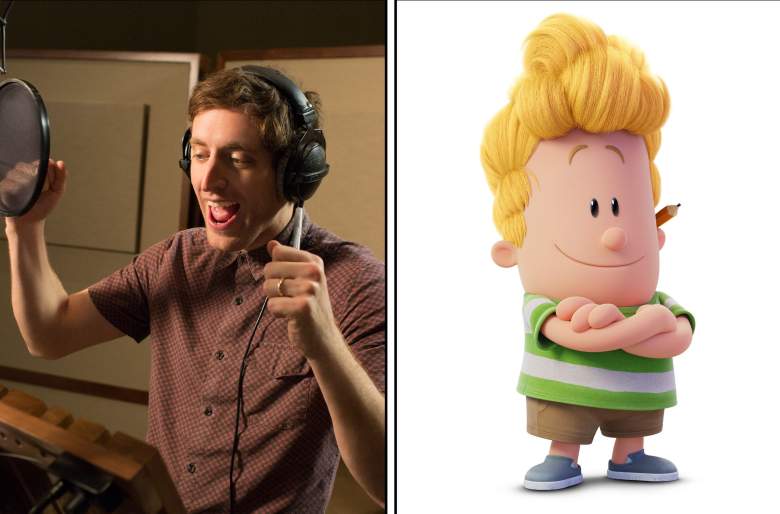 Thomas Middleditch provides the voice for Harold Hutchens, George’s best friend. Middleditch stars as Richard Hendricks in HBO’s Silicon Valley and earned an Emmy nomination for his performance. This is the first time Middleditch has worked on an animated film, although he voiced “Jerry” in the live-action Kong: Skull Island. If you don’t watch Silicon Valley, you probably recognize Middleditch from the new Verizon commercials he stars in. 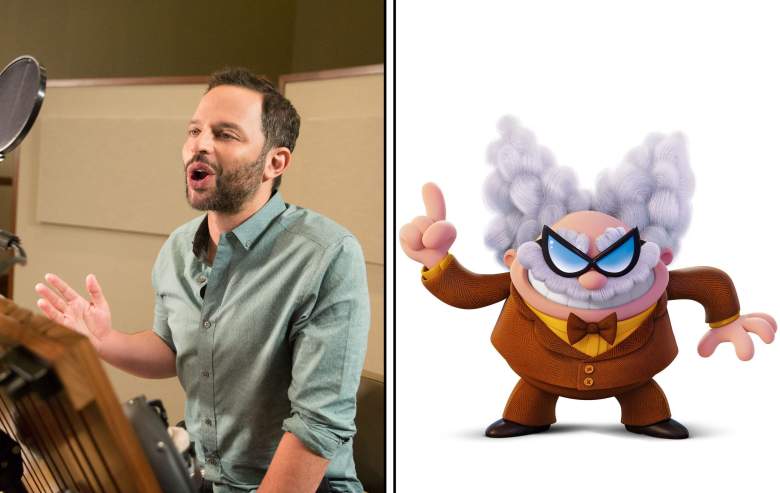 Nick Kroll plays the villain in the film, Professor Pippy Pee-Pee Poopypants. The comedian, who is best known for his Comedy Central show Kroll Show and FX’s The League, also voiced Gunter in last year’s Sing. He voiced “Douche” in the R-rated Seth Rogen animated comedy Sausage Party. Kroll will be seen on the big screen in The House, which stars ex-girlfriend Amy Poehler. 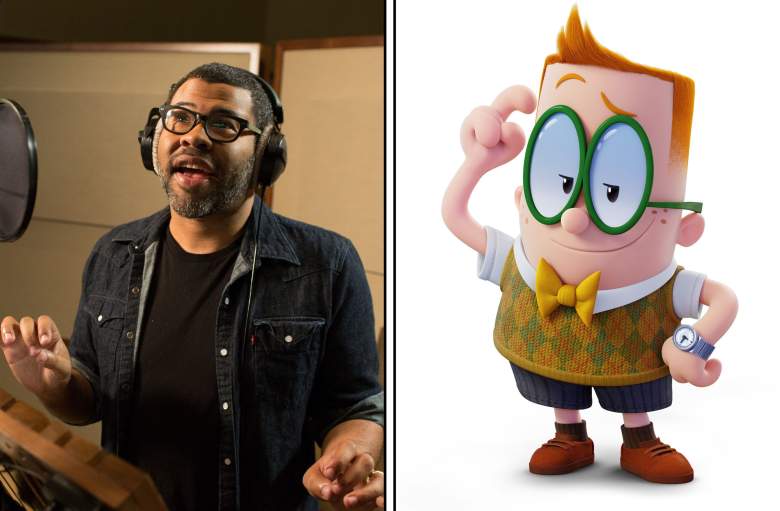 Jordan Peele, one half of the Key & Peele comedy duo, voices George and Harold’s nemesis, who works with Professor Poopypants. Peele is best known for his work on Key & Peele, but he also broke out as a director with Get Out, a shocking box office and critical success. Peele also voiced the Beta Wolf character in Storks. 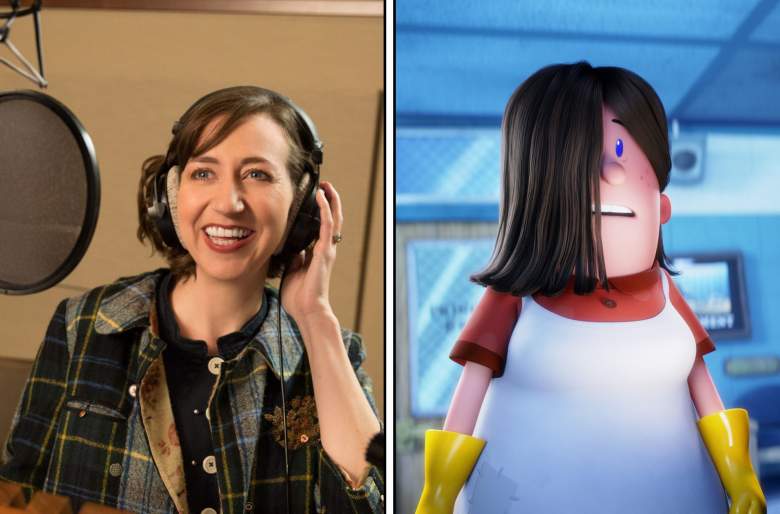 Kristen Schaal voices Edith, a school lunch lady who is in love with Kr. Krupp. Schaal is best known for her role as Carol in The Last Man on Earth and Mel on Flight of the Conchords, as well as her work on The Daily Show. Her voice is certainly familiar to kids, since she voices Trixie in the Toy Story movies and TV specials. She also voices Louise Belcher on Bob’s Burgers. She previously worked for DreamWorks on 2010’s Shrek Forever After. She also voiced Shannon in Despicable Me 2 and Barb in Cloudy With a Chance of Meatballs 2.