The 2017 CMT Music Awards are just around the corner, and fans are trying to figure out how they can get their votes in last minute.

The only category fans can still vote on is Social Media Star.

Everyone can vote 10 times per valid Twitter or Instagram handle per day through June 6, and 50 votes per handle on June 7. So get voting!

The CMT Music Awards will be hosted by Nashville’s Charles Esten, and will feature performances by artists like Thomas Rhett, Blake Shelton, Miranda Lambert, and Brett Eldredge. The Chainsmokers and Florida Georgia Line are also teaming up for their duet, “Last Day Alive”. People recently announced that Keith Urban and Carrie Underwood will be surprising fans with a collaboration for the first time ever at the CMTs.

Last year, Jason Derulo and Luke Bryan joined forces for a CMT Crossroads performance, and tonight, they’ll reunite once again in Nashville. Derek Trucks will also take to the stage to celebrate the life of Gregg Allman, who passed away on May 27.

Carrie Underwood currently holds the record for CMT Music Awards wins, and has three nominations this year. She trails Keith Urban, Kelsea Ballerini, and Thomas Rhett, who each have garnered four noms.

Tonight’s red carpet special will stream live on Facebook, and the fun will move to the TV at 7pm ET/PT on Wednesday. Cody Alan and Katie Cooke will host the pre-show. 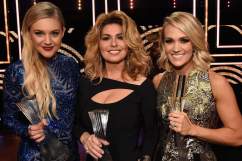