Genius, the National Geographic series centering on Albert Einstein, finished up its first season last. So you might be wondering if the Geoffrey Rush-starring show is coming back for a second season. The good news is that the show has been renewed, so it will return next spring. The bad news is that Rush won’t be back because the show will focus on a different genius.

The second season of the series will focus on Pablo Picasso, as National Geographic announced.

“The remarkable story of artistic visionary Pablo Picasso is the perfect subject for season two of Genius,” producer Ron Howard said in a statement. “Picasso was a trailblazer who left a profound artistic and cultural impact on the world and we look forward to continuing our successful partnership with National Geographic and Fox 21 Television Studios in telling the untold story behind the brilliant individual.”

The first season of the series starred Rush as an elder version of Einstein, while Johnny Flynn played the younger Einstein in flashbacks. Emily Watson also co-starred as Elsa Einstein, Einstein’s second wife. The series debuted on April 25, and was based on Walter Isaacson’s Einstein, His Life and Universe.

A few days before the series premiered, Deadline confirmed that the show was renewed for a second season already, thanks in part to the buzz the project generated for a network that usually focuses on documentaries.

“We are thrilled to bring back Genius for a second season and establish National Geographic’s presence in scripted television,” National Geographic Global Networks CEO Courteney Monroe said in a statement in April. “The Genius franchise has proved to be the epitome of the premium, smart and highly entertaining content that our brand embodies and our audience craves.”

The decision to renew the show early paid off. According to TVSeriesFinale, the show averaged 1,055,000 viewers through the first eight episodes.

National Geographic is hoping to use Genius as a launchpad for other scripted shows that will air next year. Variety reports that NatGeo also renewed Mars for a second season.

The two new shows are The Hot Zone and an untitled series set in the 1960s. The Hot Zone is a 21st Century Fox TV co-production with Ridley Scott’s Scott Free and Lynda Obst Productions. It’s set in 1989, and is based on Richard Preston’s book about the origins of the Ebola virus. 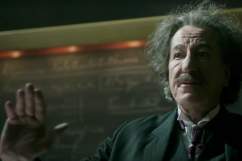 ‘Genius’: What Time & Channel Is the Albert Einstein Series On Tonight?