It’s the moment that PLL fans have been both dreading and waiting for … the series finale of Pretty Little Liars. After seven seasons, the show comes to a close and fans will finally find out who the mysterious, major villain is on the show. Get the full rundown on tonight’s PLL show schedule, what channel to watch and more.

FINALE EPISODE TITLE & SYNOPSIS: ‘Til Death Do Us Part’ – Seven seasons of secrets come tumbling out in the two-hour series finale … All is revealed as the ultimate endgame comes to light.

LIVE STREAM: Click here to check out how to watch PLL online via live stream.

ADDITIONAL DETAILS: Fans can catch up on all the PLL drama with an all-day marathon of season 7, starting at 11 p.m. ET and running up to the series finale.

One thing that was very strange that happened this season was an encounter between “Spencer” and Ezra at the airport. In their quick conversation, Spencer asked Ezra to not tell the other girls that she was there and who she was talking to (Wren). It was very odd and felt a bit out of character. Could Spencer have an identical twin? 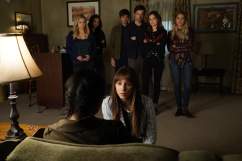