Dressed in all black like the #omen ?- Dress x @fashionnova discount code " Mehgan " for 20% off

Last week, reports surfaced that Rob Kardashian was dating Mehgan James, 26, just a couple of months after splitting from his fiancee, Blac Chyna. The rumored new couple had not gone public with their relationship yet, nor had they made things “Instagram official,” however multiple outlets confirmed that the two were indeed an item.

News of this new relationship came just two days after Kardashian posted a loving tribute to the mother of his only child on Instagram, this according to People Magazine. It appears as though Kardashian has since deleted the photo.

“On my first episode of Rob’s Random Cornball Thoughts is This young lady who grew up to be the woman I love and the mother of my child. She is beautiful and gave me my first child. @blacchyna,” he wrote. In a subsequent post, Kardashian shared a throwback of Chyna and captioned it, “Awww look at my little Angela at 14!!!!!! Hahaha I LOVE YOU !!!! @blacchyna.” That post has also been deleted.

On June 5, TMZ reported that the relationship rumors were just a set up.

1. James’ Team May Have Made up the Whole Story for Publicity

Shortly after the relationship news hit the internet, Kardashian took to social media to deny the rumors. In fact, the Keeping Up With the Kardashians star denied knowing James and said that he had never even met her. Check out his tweet below.

Wait reading online about some chick I'm dating Megan something. Not true never even met her or heard of her before

Now, according to TMZ, James’ team has been accused of making up the whole story.

2. James Is the First Woman Kardashian Has Been Linked to Since Blac Chyna

Kardashian and Chyna had a very up and down relationship from the start. Over the past year or so, the two have broken up countless times, gotten into nasty fights, and have fooled everyone into thinking that their relationship was actually over.

Since their most recent split, Kardashian has been posting a lot of photos of the couple’s daughter, Dream. As mentioned earlier in this post, he did upload a couple of pictures of Chyna over the past few days and even captioned one of them with “I love you,” which made many people wonder if the two were back on again.

However, on Thursday, James’ name popped up online as Kardashian’s new love interest.

“Rob’s been seeing [reality star] Mehgan James for almost three months, and most of the Kardashians are very upset about it because Mehgan is known for being out of control and volatile. The Kardashians want Rob to find a woman who is kind and calm,” a source told InTouch Weekly, first to publish the news.

James dated Kedrick Brown, a former Boston Celtics and the Philadelphia 76ers star. Her relationship wasn’t highly publicized but it did land her a role on VH1’s Basketball Wives LA years after their split. In a 2015 interview with Jill Munroe, James was asked how she landed a role on the show — and if she was currently dating a basketball player.

“Jackie and I at one point shared the same publicist. My publicist introduced me to Jackie at one of her events and she was telling me a little bit about the show and she thought that I would be a good fit so she introduced me to the other girls and from there I got cast. … No, my own single character, you know how Bambi – from season 3- came in and was Malaysia’s friend, that wasn’t my character at all. I dated Kedrick Brown, he played for the Celtics and the Cavs and the 76’ers, but we don’t date anymore, and they don’t really display him on the show,” James said.

4. James Is Said to be a Fan of Kardashian’s Sock Line

Sources say that James and Kardashian have become great friends and that she is a huge supporter of his sock line, Arthur George, named for his middle name (Arthur, which is also his late grandfather’s middle name) and his late father Robert’s middle name (George).

According to the company’s website, Arthur George was created thanks to “Robert’s life-long passion for men’s accessories and his observations of the growing trend in vibrant streetwear, and lack of colorful, unique socks for men.” This is something that Kardashian has been passionate about for the last few years, so hearing that James is a supporter is really no surprise.

“Mehgan is living for this moment right now. Mehgan’s been supporting Rob and his business for some time now. They’ve been really close friends for about three months,” a source told People Magazine.

In 2015, James announced that she had been working on her very own underwear line called “Fresh Pear.” It’s possible that her and Kardashian bonded over making and designing clothing accessories.

5. James Has Been on Several Reality Television Shows

James has had quite a bit of success in the reality television world — not unlike Kardashian and his uber-famous family. She got her start on 50 Cent: The Money and the Power back in 2008. She finished fourth in the competition, in which “aspiring hip-hop moguls competed in challenges to win an investment from [50 Cent] to start a business,” Us Weekly reports.

From there, James appeared on Season 9 of Oxygen’s Bad Girls Club. She was kicked out of the Bad Girl’s clubhouse after a fight. She was on Basketball Wives LA in 2015 and, according to her IMDb page, she’s currently filming a show called The Millennial Mogul. 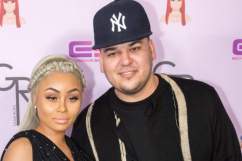