Susan Boyle has been attacked by a gang of up to 15 teens, according to The Mirror. The Britain’s Got Talent star has been harassed by this gang several times recently. The 56-year-old singer has been an apparent target of the gang and has encountered them in different places.

Boyle, who lives in the neighborhood of Blackburn in Scotland, has been harassed outside of her home, out on the street, at a shopping plaza, and at a bus stop.

“In one incident the gang, mainly boys, set light to paper and threw it at her. They had surrounded her at a bus stop before pelting the cowering star with anything to hand. In another attack, the Scottish star was on a bus when a number of teens started throwing stones at the vehicle and hurling abuse,” The Mirror reports.

“I was going inside the Mill Centre, Susan was walking out and they were all standing at the entrance and they said to her ‘Why don’t you get yourself a pair of glasses you ugly, old b—h.’ It’s horrendous,” a witness told The Mirror.

Although there have been other similar attacks noted in Scotland, this group of teens appears to be targeting the singer. She has fallen victim to their attacks repeatedly. It is unknown if she has was physically injured in any of the aforementioned instances.

A rep for Boyle told The Mirror that they had contacted police in an effort to keep Ms. Boyle safe. The rep has not commented publicly on the report.

Boyle has not spoken publicly about the apparent harassment. She is not an avid social media user and none of her official accounts make mention of today’s report. The last tweet sent out from her official Twitter page advertises an upcoming appearance. You can see the tweet below.

Susan will be performing at the @glamisproms on July 15th! You can purchase tickets here https://t.co/1Gfc7eaT2X pic.twitter.com/oZ5biMoUqC

It is unknown if extra security measures will be taken to ensure Boyle’s safety at this appearance. 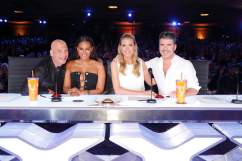 Read More
Susan Boyle
Susan Boyle has been attacked a few times by a gang of about 15 teens.