On tonight’s episode of The Profit, a company titled Swim by Chuck Handy Inc. is featured, with Marcus Lemonis trying to lend a hand. And, according to CNBC:

When SWIM first launched in 2010, the company instantly attracted attention thanks to its body-positive mission. But despite all the buzz, its designs just haven’t connected with consumers and sales have suffered as a result. With their life savings sunk into SWIM and a lack of clear leadership, the Handy family business is now on the brink of closure. If Marcus can’t get this company swimming with style again, it could go under.

The episode synopsis for tonight reads:

A family-run swimwear company struggles to connect with consumers due to poor leadership, outdated designs and misguided processes.

As for the company itself, it’s mission statement reads:

Plus and Missy sized swimwear with matching coverup. Perfect for Vacations to Resorts, Islands, Beach, Pool, and anywhere there is beautiful weather.

However, when you go to the company’s website, you are not given any real information on the home page except for details about the company being featured on The Profit. As for the rest of the site, when describing the owners of the company, it reads:

The father-son duo of Chuck Jr. and Chuck III are the heart and soul of the company. Chuck Jr. is the CEO & Co Founder of Swim By Chuck Handy. As a hands on CEO, Chuck draws from his extensive 35+ years experience in the swimwear industry to push the limits in material, manufacturing, style, price and designs … Chuck III is the Vice President & Co Founder, having been groomed to partner with his father since being a young boy and playing in the fabric stores on 42nd Avenue in New York City. Over the years, they both have consulted and partnered with some of the worlds most innovative brands to introduce them to the swimsuit industry, including True Religion , Jessica Simpson, Your Best Look “YBL Swim” and Swim-Sets.

Some may recognize son Charlie III from the reality show Dating Naked.

Now let’s get into the real deal with the company. Did they learn anything from Marcus Lemonis’ visit? According to Chuck, who spoke with Miami.com:

[Marcus Lemonis] is a caring individual who believed in us and our story. He quickly explored our strengths and weaknesses too. We also learned he wanted us to succeed off the charts and to expand our horizons, which I believe we are aspiring to. Working with him was one of the best experiences of my life. I cannot thank him enough for all the faith he had in us.

In addition, Chuck revealed that much is different since being a part of The Profit. He explained that:

Our lives and business alike have changed dramatically. We are focused and working around the clock to execute our product and Web for our show. Our process has changed. No longer am I in a position to carry a lot of the load. Mary Ellen and Charlie carry most of it. When they need me I’m there to help with my contacts, knowledge and hard work to get a job accomplished. I love having the opportunity of watching Charlie and Mary Ellen make it happen. 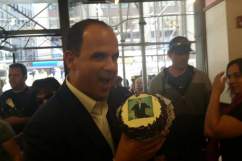 Marcus Lemonis’ Net Worth on ‘The Profit’