Migos made a splash at the 2017 BET Awards on Sunday, performing their hit single “Bad and Boujee” and winning the award for Best Group. But things seemed to take a sour turn after the show was over, as shown in their interview with Joe Budden and DJ Akademiks. In the interview clip, which runs little over a minute, DJ Akademiks repeatedly asks Migos member Takeoff what he is saying– visibly agitated the trio.

Budden, who was relatively silent up to that point, interjects Takeoff, saying “Alright, we gotta wrap this up though.” Quavo, another member, then responds: “Well wrap it up then.” Things appear to go smoothly after that, with Akademiks thanking Migos for their time, but Budden proceeds to stands up, throwing his microphone on the floor, and walks out on the interview before its finished. Quavo, Takeoff, and Offset don’t take kindly to Budden’s actions, and follow suit by throwing their microphones down.

Though the audio is tougher to make out at this point in the video, Quavo can be heard saying “What you trying to do?” Migos begin to walk towards Budden, seen on the left side of the frame, before security and a group on other men come in to break things up.

The altercation seemingly continued with Budden when another video surfaced online, this time showing the Migos in a parking lot. It appears that they changed clothes between videos, as Offset can be seen in a white shirt and Quavo can be seen in a brown shirt and black pants. They are approaching someone– presumably Budden– aggressively, but come in contact with more security guards. As of now, it is unclear how serious things got between Budden and the Atlanta trio.

Fans initially thought the altercation was between Migos and Chris Brown (as the video title above indicates), because Brown can be seen briefly in the video wearing green pants and leaning up against a car. This, taken with the alleged bad blood between him and Quavo, who’s been seen with Brown’s ex Karrueche Tran as of late, fueled the theory. While it is unclear what role Brown played in things– if any part at all– it appears that most of the exchange was between Migos and Budden.

The altercation has since blown up on social media, with many citing Budden’s attitude during the interview as unprofessional. Others claimed that the veteran rapper was in the right, and that Migos were being poor interviewees. Check out some of the best reactions below.

Joe Budden is so damn disrespectful. Migos should've boxed him one quick time!

Joe budden was probably mad bc the interview was wack. Migos are known for being terrible interviewers

They shoulda let Migos beat beat joe budden ass, he be acting like a bitch, yatchy was laughing at him ,migos not gone play with his ass???

Joe Budden was being rude in that interview, I don't care what anyone else may have to say about it. He was rude and no one deserved that.

I barely know what a/the Migos is, but Joe Budden is so whack for that.

@JoeBudden wasn't feeling that fake shit period. But since Migos are popular he's in the wrong now ??‍♀️ y'all annoying.

DJ Akademiks addressed the situation on Twitter, writing “Bruh we interview the #migos and s**t went left… couldn’t hear s**t n all I can say is #GETWELLJOE.” The hashtag went on to become a trending topic with fans.

This isn’t the first time Budden has made headlines for his controversial attitude. In May, Budden got into a heated debate with Lil Yachty, criticizing the rapper for his happy-go-lucky attitude. Furthermore, Budden said: “I don’t think that Yachty is hip-hop. I don’t think that Yachty’s label is hip-hop. When you’re not hip-hop and you’re trying to just troll or exploit, you get things like this.” Watch the full Everyday Struggle interview here. 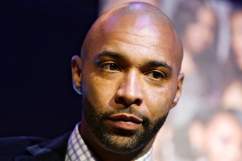 Read More
BET Awards, Hip-Hop, Music
After Joe Budden walks out during an interview, hip-hop trio Migos reportedly go after him in a parking lot.