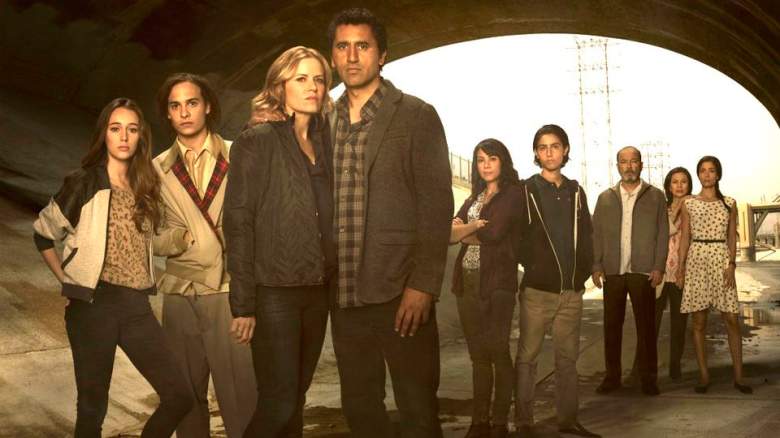 In the Season 3 premiere of Fear the Walking Dead, one of the main characters died. Who was it?

This post has spoilers for Episodes 1 and 2 of the premiere.

When we were warned that a main character would die tonight, we didn’t really believe it. Many viewers thought it would be Luciana, perhaps.

But instead, it really was a main character — someone who’s been with the show since the beginning.

He and Alicia were on a helicopter, having just escaped a compound that was overrun with zombies. As they were 20 out from a sanctuary, they were hit by gunfire from sources unknown. The bullets sprayed the helicopter and it started to go down. Travis touched his neck, and realized he was hit in the neck.

He opened the door of the helicopter.

Alicia tried to stop him, but as she got close, she saw he was even worse off than she thought. Beneath his shirt, we saw what looked like an infected zombie bite.

Travis threw himself out of the helicopter door so he wouldn’t turn into a walker and kill them all.

It was a touching and terrifying moment. Travis’ character has been through so much. He’s grown so much. He wouldn’t kill a zombie when the series began, and he fought off an entire group in hand-to-hand combat in a pit earlier in the episode.

At the time he died, only Alicia knew, along with Jack — the leader of a group they just encountered. It wasn’t even clear if they would survive the helicopter crash.

Madison and Nick are on a different convoy, on the ground, heading to the same location. She has no idea what happened. Earlier, she told Travis that they were family and she’d always be there for him. Travis had tried to sacrifice his life so Nick and Luciana wouldn’t get shot. Then he helped with a plan to rescue them. Still living with guilt over not being able to save Chris, he was able to save the rest of his family before he died.

Travis has already accepted that he could die at any moment. You can see it in his eyes. Cliff Curtis is a great actor. #FearTWD

I hope Travis fell under a dumpster#FearTWD

Technically, Travis could still be alive, since we only saw him fall from the helicopter. Alicia acknowledged that later. But it seems very unlikely.