Willie Geist, an NBC News anchor for Morning Joe and the Sunday edition of the Today Show. He will be reporting in PyeongChang during the 2018 Winter Olympics in February.

The 42-year-old William Geist is the son of CBS News correspondent Bill Geist and his wife, Jody Geist. His sister is Libby Wildes, a producer on the Oscar-winning film O.J.: Made In America.

Geist got his start in journalism in sports, first on CNN and then at Fox Sports Net. In 2005, he joined MSNBC and has co-hosted Morning Joe with Joe Scarborough and Mika Brzezinski since 2007. Last year, he became the solo host for the new Sunday Today format and has made regular appearances on the weekday Today Show, filling in for various anchors.

Willie Geist is married to Christina Geist. The couple met in sixth grade and tied the knot in 2003. They have two children together.

Geist and his wife, born Christina Elena Sharkey, have known each other since sixth grade. As The New York Times noted in their wedding announcement, they dated throughout middle and high school in Ridgewood, New Jersey.

“When they were in eighth grade, I realized that they had something really special,” Christina’s mother, Joyce Sharkey, told the Times.

The couple also realized that they were meant to be together by their senior year in high school. They were even planning on going their separate ways in college, with Geist going to Venderbilt and Christina heading to the University of Virginia. But she was put on the Virginia waiting list, so she went to Vanderbilt instead.

“We had a serious talk,” Geist told the Times. “We’d been dating for six years, and we weren’t even 20 yet. We decided it would be wise to date other people. That lasted about a week.”

After graduation, there was another opportunity to split: he moved to Atlanta for work and she didn’t. But in 2000, they went visited home for Christmas and their parents suggested they start dating again. Two years later, Geist proposed in their old middle school homeroom.

The couple married in May 2003 in Humacao, Puerto Rico. They ended up having their reception at a country club because the hotel they initially planned to have it at went bankrupt.

Christina and Todd True are the founders of True Geist, a strategic design and branding firm. True is the creative director and established the firm with Christina in February 2015. Before that, he worked as the Global Creative Director for Johnson & Johnson for nine years.

Christina is the Strategy Director of the company, using her skills as a storyteller. She worked with True at Johnson & Johnson in 2007, when she joined the Global Strategic Design Office. She first worked in journalism in Nashville after graduating from Vanderbilt University in 1997. But she soon decided to try out public relations.

According to her LinkedIn page, Christina worked for Interbrand from 2004 to 2006, before she was hired by Johnson & Johnson.

In September 2016, Christina became a published author. She wrote the children’s book Buddy’s Bedtime Battery, which was published by Penguin Random House. The book features illustrations by Tim Bowers (Pirate’s Lullaby, Not You Typical Dragon).

On her website, she shares that the book centers on Buddy, who imagines life as part of a robot family. The book was written for children who are around the same age as the Geists’ two children, 10-year-old Lucie and 7-year-old George.

In an interview on the Today Show, Christina said she was inspired to write the book by her own struggles to keep the kids asleep. It’s especially difficult when Geist has to get to work so early in the morning.

“Willie is typically very, very quiet on his way out. (The ninja analogy is a good one.) But, there is a very distinctive “click” when a New York City apartment door closes. And, my kids sense that “click” in their sleep. Before long, a sneaky little sleepwalker can be found shuffling into my room, crawling into my bed, settling into Willie’s pillow, and shifting like a compass to a completely horizontal position with his or her feet nestled comfortably on top of my face. And I wouldn’t want it any other way,” she told Today.

4. She Is the Founder & CEO of Boombox Gifts

Happy Birthday @WillieGeist ! Can't wait to see what the next 25yrs has in store. xoc pic.twitter.com/ZBPKwy7bzw

In September 2015, Christina launched Boombox Gifts. She wrote on the company’s website that she was inspired by the memory boxes she and her friend were going through one day. She decided to make one for her father’s 70th birthday.

“I realized the emotional impact – the ‘boom’ as I call it – was as strong for me (the gift giver) as it was for him (the recipient),” she wrote.

So, she decided to create a company that helps customers build their own “boom” box. The process starts with the customer choosing a box style, adding optional invites, then uploading photos and writing messages. Christina’s team puts the box together and you can invite friends and family to contribute messages to it before it’s sent out.

The boxes aren’t cheap though. For example, the “black stripe” design costs $220.

5. She Tried Out Journalism Before Moving Into Public Relations 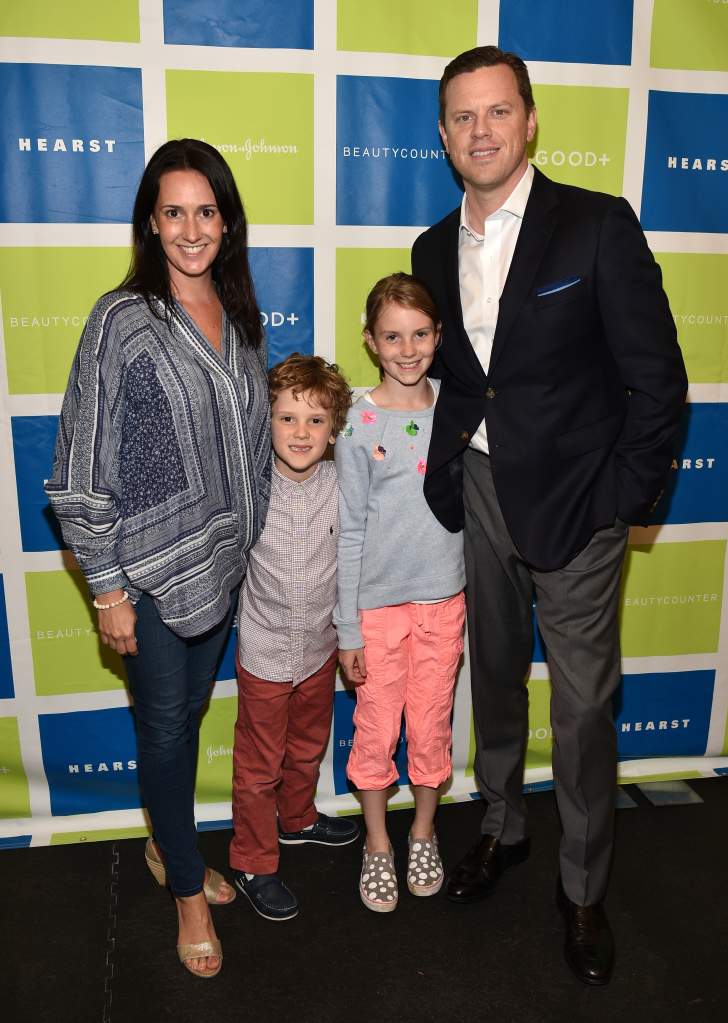 Willie and Christina Geist with their children, Lucie and George. (Getty)

Christina also tried her hand at journalism. While it fit like a glove for Geist, it didn’t work out for his wife.

As Vanderbilt notes, she majored in political science with minors in psychology and history. She planned to work in TV news, landing a job at Nashville’s CBS affiliate.

After six months of working on the overnight shift, she realized that the job wasn’t for her. So, she began a public relations career in Boston. She moved to New York to work in brand strategy, and she has remained in that field.

Christina told Vanderbilt that she still has a close group of college friends who she works with. She has five friends who are members of the Founding Friends Advisory Board of Boombox Gifts LLC and each have a 1 percent stake in the business.

“That is so Shark,” friend Amy Yarbro Shaffer told Vanderbilt, referring to Christina as “Shark,” a reference to her maiden name. “There is absolutely nothing she won’t do or can’t do. She dreams so big and makes it happen—like this little idea. We’re all sitting around the pool having a glass of wine, and she’s like, ‘I think we can do this.’ And by God, it’s happening. She can do anything.”