Getty Madison Parker and Aaron Carter on May 13, 2017 in Carson, California.

Aaron Carter took to Twitter on Saturday night to announce that he is bisexual.

“When I was around 13-years-old I started to find boys and girls attractive,” he wrote in a lengthy post, “There were years that went by that I thought about it, but it wasn’t until I was 17-years-old, after a few relationships with girls, I had an experience with a male that I had an attraction to who I also worked with and grew up with.” Read the full post below.

According to TMZ, Carter broke up with his girlfriend Madison Parker in the days leading up to his announcement. The couple dated for over a year, and a source close to the couple states that they still “love each other and respect each other dearly.”

Here’s what you need to know about Parker and her relationship with Carter:

In an interview with Hollywood Life, Carter revealed that he and Parker had been dating for 6 months, meaning that their relationship started sometime in late 2016.  Carter’s Instagram account is set to private, but Parker has posted several photos of the couple together on her account.

On June 22nd, Parker posted a picture of a message that the singer sent to her. It read: “I never had a woman who appreciated and understood what family is all about. I love you my ethnic beautiful woman.” Parker responded with a lengthy caption:

To feel this kind of love from you makes me believe that there is such things as soul mates. I remember I reached out to shoot you for an editorial, needless to that night you took me to dinner and we have only spent a total of 5 days apart since we met 9 months ago. Lucky to have found you. Before you came along I was alone, depressed and didn’t know my self worth because I strayed away from God. Now I can say I truly live in a place of happiness and bliss with you and with God by our side.

Parker also supported the singer when he was hospitalized for a medical condition called hiatal hernia. NY Daily News reports that fans openly mocked Carter’s thin build, and Parker clapped back at them on Twitter by writing “NO @aaroncarter IS NOT OK RIGHT NOW. PLEASE GIVE HIM SOME SPACE AND PRIVACY.”

2. She Served As the Inspiration for Carter’s New Music

Carter’s career peaked in the early 2000s with the album Aaron’s Party (Come Get It). Since then, Carter has had a difficult time maintaing success, and he went on musical hiatus in 2002. He returned in 2015 with new music that was reportedly inspired by his break up with Lee Karis.

“Like a ride or die,” he told ET Online, “I’ve said that to her before and, at one point in our relationship, she was like, ‘I’m not your ride or die. I’m not committed to you.’ I was just like, ‘That’s gonna hurt me. And it did. And we broke up and, you know, I made mistakes. And we just keep coming back to each other.”

After this tumultuous relationship, Us magazine reported that Carter was able to bounce back with Parker. “It’s about loving each other and showing the world — and not being afraid of that,” he explained. “That’s something I didn’t get in my previous relationship. LØVË is all about an ex-girlfriend who didn’t love me.” He expanded upon this with Hollywood Life, saying “Madison and I have been together about 6 months, and I’ve already written more songs about my new love than about my ex and they’re going to be in the album.” The LØVË EP was released on February 10th.

3. She is a Professional Freelance Photographer

In her professional life, Parker is a freelance beauty photographer. On her Linkedln account, it says that she graduated from the Academy of Art University with a BFA in Photography and she currently works under the name Madpics in Los Angeles. Her website bio adds that she mentored under photographers such as Art Streiber, Mark Leibowitz and David LaChapelle.

In a 2014 interview with Danni Lazaro, Parker discusses how she came to discover photography as a passion:

Most photographers learn photography first, and editing second. For me, it was the other way around. I’ve been manipulating photos for years. One of my earliest masterpieces involved me compositing my mom into a picture with Pierce Brosnan. We got such a laugh out of that! For a while, I had aspirations of being a book cover artist, but got frustrated working with stock images, so I decided to buy a DSLR and learn photography so that I could create my own catalog of stock. I never expected to fall in love with photography the way that I have, nor did I think I would enjoy photographing people as much as I do.

On her website MADPICS, several photos include Carter as the subject, including one of the singer with a blue flower in his mouth, and wearing a pink sweater while standing atop red rose petals. Click here to check out Parker’s full gallery.

4. There Were False Rumors That She & Carter Were Engaged

GettyMadison Parker and Aaron Carter on May 13, 2017 in Carson, California.

Less than a day before they were arrested, reports surfaced that Parker and Carter might secretly be engaged. According to Media Mass, the couple was seen seen looking at some pricey rings in a couple of major jewelry stores, including a “major diamond baubles that could only be described as the kind usually slipped on a woman’s left-hand ring finger.” Furthermore, an unnamed source claimed that an engagement is inevitable. “He’s madly in love with her,” the source adds. The report was later said to be untrue.

This isn’t the first time Carter has faced engagement talk. In 2006, the singer actually proposed to Playboy model Kari Ann Peniche, only to call it off a few months later. Peniche told People magazine “He’s really young and just needs to get his act together. I don’t know what’s going on right now. We’re friends and maybe we’ll get back together sometime. We haven’t ruled out getting back together.”

5. She & Carter Were Arrested for Marijuana Possession in July

According to NY Daily News, Parker was in the passenger seat of the vehicle when Carter when pulled over for a DUI in July. And like her boyfriend, Parker was arrested and charged with possession of marijuana less than one ounce, obstruction of law enforcement officers, and possession of drug-related objects. Both were placed in police custody, said the Habersham County Sheriff’s Office.

TMZ reports that her bail was set at $4,360. Both were eventually released. More recently, the couple was seen driving around Los Angeles together, seemingly in good spirits per TMZ. A source close to Carter affirms that he and Parker will remain friends. 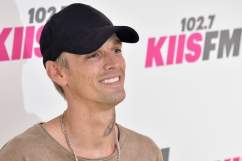